Mercer Island road safety project worked so well they decided…not to do it again? 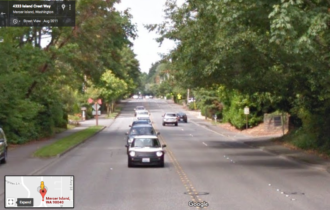 Lives could be protected here so easily. Image via Google Street View.

The 2012 project worked so well, the city has decided … not repeat it? Huh?

The Mercer Island Reporter has the story:

Island Crest Way will remain four lanes from Merrimount Drive to Southeast 40th Street as the city of Mercer Island continues a 10-week project to repave and improve drainage on the road.

The project, which started July 18 and is planned for completion by the end of September, does not involve the controversial three lane reconfiguration implemented in the 4300-5300 blocks of Island Crest Way in 2012.

But several data requests from the Washington State Department of Transportation (WSDOT) for crash data on Island Crest Way from 2001 to 2016 indicate that the lane reconfiguration has reduced accidents on the Island’s main thoroughfare in those blocks. The data shows a 61 percent reduction in non-injury collisions and 75 percent fewer injury accidents.

The last time the city decided to scrap a safety project on Island Crest Way a 17-year-old high school student was struck in a crosswalk in a common type of collision known to occur on four-lane streets (one person stopped to let him cross, but the person driving in the second lane did not). It seems they are willing to repeat that mistake, but not willing to repeat a clear safety success that would essentially eliminate that risk for future victims.

The public is not always going to agree on everything. But a city has a moral imperative to protect the public when it makes street investments, especially when the benefits are so clear. Yes, even if some people get irrationally angry about it.

Because the Mercer Island is repaving and restriping the street anyway, instituting a safety upgrade would be essentially free. For zero dollars the city can reduce injuries by 75 percent. Yet they aren’t going to do it.

The people who are not injured because of a safety change can’t exactly thank city leaders, but their health would be protected nonetheless.

If the city puts this road back to a design they know is dangerous, those preventable injuries are at least in part the city’s fault. There is no reason anyone should get hurt while walking, biking or driving on Mercer Island.

Founder and Editor of Seattle Bike Blog.
View all posts by Tom Fucoloro →
This entry was posted in news and tagged island crest way, mercer island. Bookmark the permalink.

25 Responses to Mercer Island road safety project worked so well they decided…not to do it again?