My favorite description of the Melrose Promenade concept is “Capitol Hill’s front porch.” Because the underutilized street with incredible views should be both a major non-motorized route and a great place for people in the city’s densest neighborhood to hang out.

Back when I was active in Central Seattle Greenways, the group helped project volunteers (like dedicated visionary Mike Kent) win some city grant funding for planning and community outreach. So though I have not been personally involved in the project since then, it’s amazing to see all that work come to fruition with $3 million in funding for construction. I can’t wait to see it in action.

More on the grant funding from Scott Bonjukian at the Urbanist:

Today the street is bombarded with the roar of freeway traffic and has a narrow sidewalk on only one side, offering not so much as a street tree or bench in this high density neighborhood. But the street also offers stunning views of the city skyline and the Olympic Mountains beyond. Urban planner and local resident Mike Kent saw a disconnect between Melrose Avenue’s poor conditions and its views of the city. Six years ago he started recruiting friends, neighbors, local organizations, and business owners to advocate for safety changes and public space improvements.

In 2012, a $20,000 grant from the City of Seattle enabled the Melrose Promenade Advisory Committee to hire design consultants and host several public workshops. These helped shape the community’s vision for what Melrose Avenue could become. The work led to an 88 page concept plan (PDF) which includes site analyses, public feedback, and schematic renderings.

Billing itself as “the front porch to Seattle’s Capitol Hill”, the concept plan has a variety of elements that support a mix of street users: 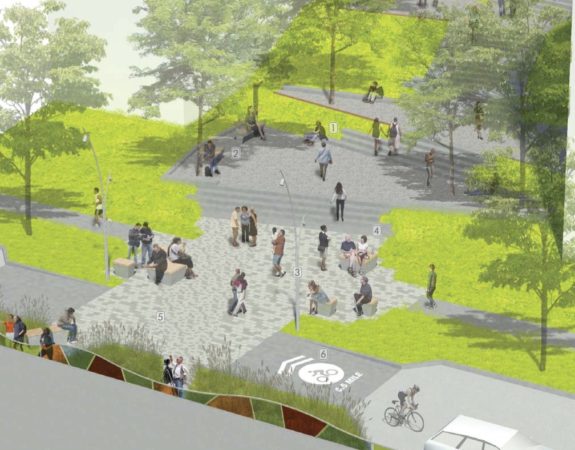 Overlook concept from the excellent and extensive Visioning Project (PDF)

This entry was posted in news and tagged Gone Bikin' 2016. Bookmark the permalink.