Your guide to biking in the 2016 Fremont Solstice Parade 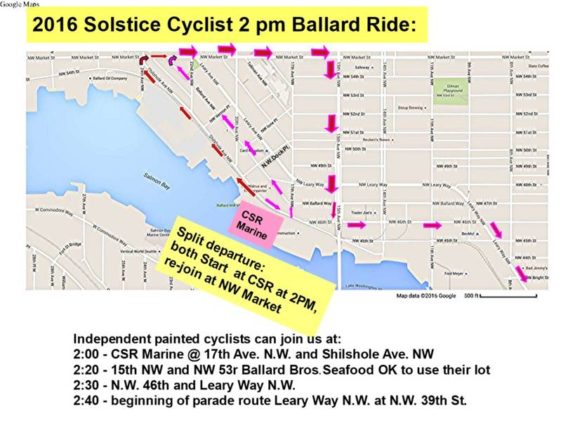 Optional ride around Ballard before the parade.

Will 2016 be the year you finally go for it and ride in the Fremont Solstice Parade?

The iconic tradition where everyone is invited to strip down “as bare as you dare,” paint their bodies and bike ahead of the official parade continues to grow with an estimated 1,500 participating in 2015.

In essence, all you have to do to ride is get painted and show up with your bike at NW 39th and Leary Way NW between 2:30 and 3 p.m. Saturday. You do not need to register (see below for an update on the Fremont Arts Council’s decision to back off their registration plans).

Some people get painted at home or private paint parties. For anyone else looking for a spot to get painted, volunteers are again hosting their popular painting party at CSR Marine on Shilshole Ave in Ballard. Bring $10 to donate at the door, along with some extra bucks if you also want to borrow paint.

Note that the organized painting party attendees will start a cruise of Ballard at 2 p.m. before entering the parade route. People at private backyard painting parties are welcome to join, of course.

Fremont Arts Council backs off on its registration plan

As we reported last week, the Fremont Arts Council (“FAC”) sent out a press release announcing that they would start registering people biking in front of their official parade.

This didn’t go over well for various reasons, including privacy concerns for people who don’t want their names in a database associated with a naked bike ride and concerns about the FAC’s plans to “curate” the body art and limit riders next year.
So to be clear: You do not need to register with the FAC to ride.”People are welcome, we’re not going to do registration this year,” said FAC President Harper. “If cyclists want to give us money directly, go for it.” You can donate directly to the FAC online or by pitching some cash into their big green hat during the parade. Any money left over after covering costs for the CSR Marine painting party will also be donated to the FAC.
Harper said the FAC’s press release “blindsided” some of the bike ride volunteers. Indeed, several people who organize the annual paint party and volunteer as ride guides to help keep things moving safely did not know about the press release until I asked them about it. In a statement posted to the SolCycles Yahoo group, organizers were particularly concerned about the FAC’s plans to limit and curate the body art.”The emphasis on curation is unwelcome to us and is inconsistent with our understanding of the spirit of the Fremont Solstice celebrations,” the statement said.”I believe we were just kind of at a misunderstanding,” said Harper when asked about why the FAC backed off on their call for registration, rider limits and especially paint job curation. “I think that came across in a weird way.That said, there may be an inherent sticking point between the FAC and many ride participants about where unpainted people fit into the event. Harper is clear that she doesn’t think people should be unpainted, and that was the source of some of their rule change attempts.”What we really want is for people to just be painted,” she said. “Just full on nudity without any decoration isn’t really what we’re looking for.The Solstice Cyclists have a more laissez faire stance. In their FAQ, they simply note that being painted is “part of the tradition,” but that “nobody’s going to force you to wear paint.”Is wearing no paint an artistic statement of its own? What about people in the crowd who get wrapped up in the moment and decide to join in? Is that a bad thing? And how would you enforce such a rule? You can see how this debate gets tricky.But as the ride grows and financial strain on the FAC increases (for a variety of reasons beyond the bike ride), it’s at least worth a conversation. And on that, most seem to agree.The FAC hopes to host meetings about the ride before next year’s ride, so stay tuned. In the meantime, the FAC could really use more event volunteers, especially parade monitors. So if you plan to keep your clothes on this Saturday, being a volunteer is a good way to make sure the parade goes smoothly (and hey, you might get a front-row seat). Sign up online.