OK Computer, a machine gun made of car parts, and other thoughts on art and cities 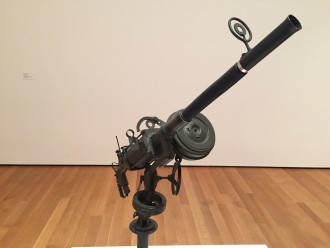 Cities are incubators of art, and art influences cities. In the best cases, they are one and the same.

Publicola’s Josh Feit has been exploring these and other ideas in his City Canon series. Basically, he reaches out to urban design thinkers and asks them to submit little essays about pieces of art they think say something about the way cities work (or don’t).

I submitted three pieces, which ran last Friday. I was in a bit of a negative mood at the time I wrote them, and so I was apparently drawn to works that bring out the negative impacts of car-centric engineering on cities. But it was a fun exercise.

I wrote about a sculpture by Pino Pascali I saw at MoMa in New York City. I stopped in my tracks when I saw it: A machine gun made from car parts.

I also had to post one of my favorite short animated films of all time: What on Earth! That one, you just need to watch for yourself.

But for some reason, I was also drawn back to Radiohead’s OK Computer, an album central to my formative music listening years (it came out when I was 12, but my really cool older sister listened to it a lot). I’ve listened to this record now for 19 years, but it dawned on me only recently how cars and car crashes play an illustrative role in it. And then I started thinking about how perfectly self-driving cars would fit in this album and, well, I got a little carried away with it.

You can read them all here.

Which pieces of art strike you as particularly salient on urban design? Post about them in the comments below.