Note: Several are bike stories fell through the cracks during the election craziness. This is one of them. We’re working to play catch-up now that the dust is settling. If you think we missed something big recently, email [email protected]. 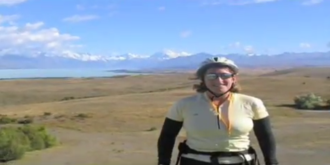 Photo of Susan from an Outdoors for All video (watch below)

The very drawn-out legal battle between Mercer Island and Susan Camicia is finally over. And though you may not know who she is, everyone who rides a bike in Washington State owes her a huge debt of gratitude.

Nine years ago, Camicia was biking on the I-90 Trail when she swerved to avoid some park-and-ride construction fencing that was sticking out into the trail. In her attempt to avoid the hazard, she struck a wooden bollard. Her neck broke in the crash, leaving her paralyzed.

The City of Mercer Island settled with Camicia for $6.95 million in October (the city’s insurance will cover it), according to the Mercer Island Reporter. In a statement, the city stated that safety is a priority:

The safety of bicyclists and all trail users is of utmost importance to the City: the I-90 Trail carries tens of thousands of users every year across Mercer Island without incident. Fortunately, no other I-90 Trail injuries of this scale have occurred since this one, and the City strives to maintain that record of safety.

But in making their statement, the city also acknowledges that the trail is, indeed, a transportation facility. But this is only because Camicia fought the city all the way to the state Supreme Court, which made a vital ruling (PDF) in her favor that could protect the legal rights of people biking on trails all over the state.

Mercer Island originally tried to get summary judgment to throw out Camicia’s claim by hiding behind “recreational immunity.” Basically, this is an important rule that allows people to do all kinds of potentially dangerous recreational activities in free-to-use public park land without the public entities being held liable for injuries. Imagine, for example, if someone could sue the government for slipping in some mud while hiking in the woods.

But the I-90 Trail is not just a park for recreation. It is a transportation facility, and as the city notes in its press release, it “carries tens of thousands of users across Mercer Island every year.” Like roads and sidewalks, government entities that own trails should be on the hook for unsafe conditions that cause injuries. Otherwise, governments may not have an incentive to maintain safe trail conditions if they don’t want to. And people who crash due to government neglect would not have a way to file a clam to cover their bills and assist with potential lifelong costs.

That’s why everyone who bikes in this state owes Susan Camicia a debt of gratitude. Trails are part of the transportation system, we all know this. Now, because of her case, government entities trying to defeat such claims can’t just toss them by saying it happened in a park. They have to prove in court that the trail in question really is a recreational facility, not a transportation facility. And that’s a big deal.

You can watch her tell her story in this touching Outdoors for All video from 2008: