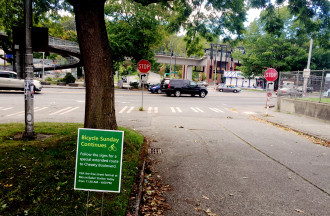 Looking west across Rainier and MLK from Mount Baker Boulevard.

You passed Move Seattle! Have I mentioned recently how great that is for our city?

Well, it’s already time to start directing the investment, starting with a major intersection that is the root of so many Southeast Seattle mobility problems: Rainier and MLK.

As we’ve reported previously, SDOT has a very promising and radical idea for fixing the problem, and you can weigh in on the biking and walking elements of the plan at an open house 6–8 p.m. Thursday at King’s Hall (behind Mount Baker light rail station).

Move Seattle includes $6 million for the Accessible Mount Baker project, which is enough to make some small-but-significant fixes and work on the design for bigger changes. Thank you Seattle voters!

The crisscrossing intersection works poorly for everyone today. All the major vehicle movements mean long waits at red lights if you’re driving or biking in the general travel lanes, on the bus or waiting at a crosswalk. Even if you only care about vehicle movements, something dramatic needs to change here. But the problems go much further.

Access to Mount Baker Station and the new housing and businesses popping up around it is absolutely terrible because of this intersection. The extra-wide streets and extra-long signal cycles create dangerous conditions for people trying to cross the street on foot between buses, Mount Baker Station, businesses and Franklin High School. You don’t have to hang out long until you see someone make a run for it across Rainier because they don’t want to miss their bus.

Dozens of collisions happen within a couple blocks of this intersection every year. People in and out of cars are getting hurt. This won’t stop until we take action.

When the current intersection was designed decades ago, it also sliced in half a historic Olmsted-designed boulevard between Lake Washington and Beacon Hill via Mount Baker and Cheasty Boulevards. These windy and very green park-like routes are part of what makes biking around Seattle so wonderful (other examples include Interlaken, Ravenna and Lake Washington Boulevards), but this particular stretch has been severely limited due to this awful mega-intersection.

But perhaps most importantly, redesigning this intersection is vital to rebuilding a true town center for the neighborhood. With comfortable movements for people on foot, extra space to gather and improved transit access (the station will only get more important as new LINK stations are added and the 7, 8 and 48 bus routes are improved), Mount Baker has a bright future as a bustling and vibrant place to live, work and play.

This could be one of the best transportation projects in the whole city. And as the big plan is developed, the city also needs to make walking and biking connections safer, more comfortable and more direct in the near-term.

For an idea of what those near-term projects might look like, here are some boards from earlier this year. You’ll have to go to Thursday’s meeting to see the updates. 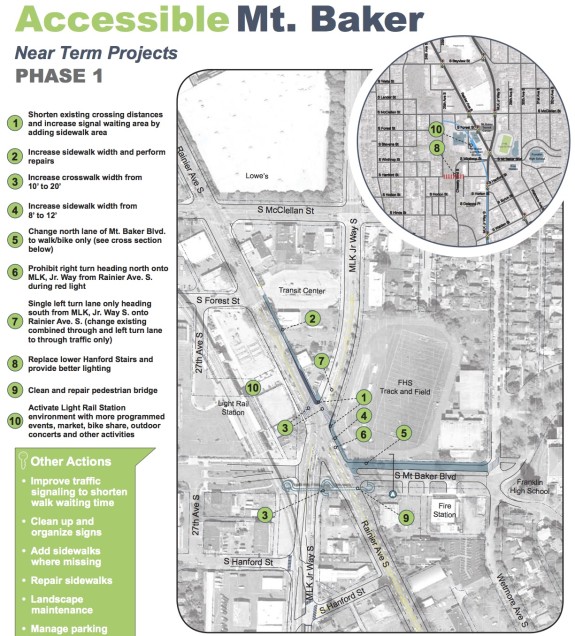 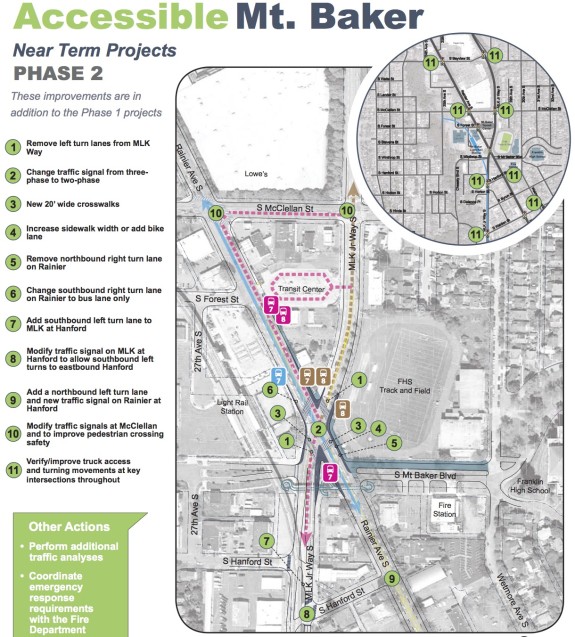 And here’s a glimpse at the bike route elements (magenta) in the radical long-term concept: 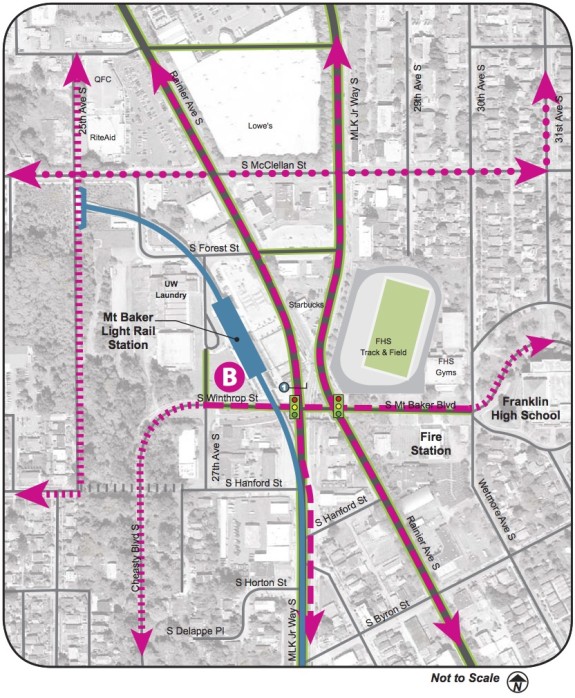 Founder and Editor of Seattle Bike Blog.
View all posts by Tom Fucoloro →
This entry was posted in news and tagged accessible mt baker, mt baker. Bookmark the permalink.