What do you think of Seattle’s low-cost sidewalk plans? 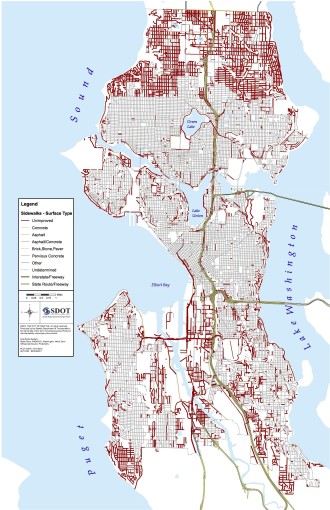 SDOT map, via the Urbanist.

Building neighborhoods without sidewalks was a truly terrible idea.

I mean, seriously. What the hell? If you’re building a place for people to live, how can you leave out the space for people to walk? It’s absolute insanity, and it happened in suburbs all over the nation (and no, it wasn’t an accident).

And the Seattle area is no exception. There aren’t too many places within the old Seattle borders without sidewalks, but many neighborhoods north and south that have since been annexed were built by people who never intended for people to walk beyond their front yards. I mean, flying space cars were just on the horizon, so why waste money on something as mundane as walking?

Well, it turns out people like walking. But retrofitting sidewalks onto existing streets is way more expensive than just doing it right the first time. In fact, it costs about $300,000 just to build one side of one block. The estimate to build all the city’s missing sidewalks? A whopping $3.6 billion. That’s three Move Seattle levies.

So if we realistically want to solve the walkability challenges in the north and south neighborhoods, we need to find cheaper ways to build more safe and comfortable walking routes more quickly. There are a variety of different ways to improve walking safety and comfort beyond the standard sidewalk, and the city wants to hear your thoughts on some of their ideas as part of the ongoing updated to the Pedestrian Master Plan.

Take this survey and let them know.

Some streets may need little more than a raised curb or line of parking stops to create a new dedicated walking space, as shown in these photos from the survey:

Other streets could get a sidewalk on just one side of the street that is integrated with gardens to catch and filter rainwater. A growing body of research shows that some of our most damaging stormwater toxins can be made much safer for salmon and other sea creatures just by filtering it through dirt. And the more rainwater we can keep from flowing into sewers, the more we can prevent harmful overflows that allow raw sewage to escape into our waterways.

And from a funding perspective, solving these problems is worth a lot of money to Seattle Public Utilities, making them a potentially great partner in creating safer streets that also retain and filter more rain water. 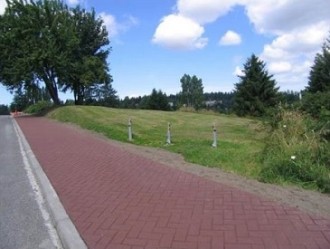 And to cut costs even further, the city is also implementing cheaper asphalt sidewalks that are dyed and stamped to look like brick. This lower cost will help the city build 250 blocks of sidewalk instead of the 150 originally planned if voters approve the Move Seattle levy.

That’s one more reason we need to pass Seattle’s Prop 1.

The levy will also fund new safe crossings at busy streets and build 60 miles of neighborhood greenways, which can be designed to make walking on sidewalk-free streets much more comfortable and safe by lowering car volumes and speeds.

If some neighborhoods also implement local improvement districts to fund sidewalks, that could also help stretch the city’s sidewalk dollars even further.

As frustrating as it is that these neighborhoods were built without sidewalks, that’s just the way it is. It’s time to stop complaining and start funding creative solutions.

Founder and Editor of Seattle Bike Blog.
View all posts by Tom Fucoloro →
This entry was posted in news and tagged pedestrian master plan, sidewalks. Bookmark the permalink.

31 Responses to What do you think of Seattle’s low-cost sidewalk plans?