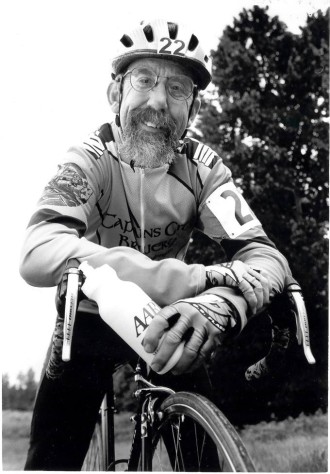 In just about every way, Jerry Baker won the Seattle-to-Portland forever.

He won the STP in 1979, the first year of the now-legendary annual ride and the only year it was actually a race.

A few months ago, Baker completed his 36th STP, more times than anyone else.

But Baker’s impact on cycling in the Seattle region goes far beyond those 200 miles. In fact, it’s absolutely incredible how many vital cycling institutions in the area he helped create and grow.

“Surrounded by loving family, Jerry Baker passed away early on September 10th after the sudden onset of acute leukemia,” says a note from family members.

Notes from people he impacted and organizations he helped start are pouring out from all over. Cycling in the area today would be unrecognizable without Baker.

He was a founder of Cascade Bicycle Club, which has grown into a rare bicycling institution that funds advocacy and education work with financial support from a long season of large rides.

Baker also helped create Marymoor Velodrome in Redmond, a rare gem for track racing. Not every city has access to a velodrome, an incredible asset for both aspiring and amateur racers.

In the late 80s, Baker helped found the Bicycle Federation of Washington, an organization with a goal of improving bicycling statewide. You now know that organization as Washington Bikes.

He also helped found the Washington Student Cycling League, which referred to him in a post today as the “Godfather.”

As Robert Freeman (former co-owner of Elliott Bay Bicycles) writes on Bike Hugger, Baker also had a hand in the bicycle industry in Seattle in the 60s and 70s, selling bikes made by people including a young Bill Davidson.

Our condolences to his family and many, many friends.

Founder and Editor of Seattle Bike Blog.
View all posts by Tom Fucoloro →
This entry was posted in news and tagged jerry baker. Bookmark the permalink.