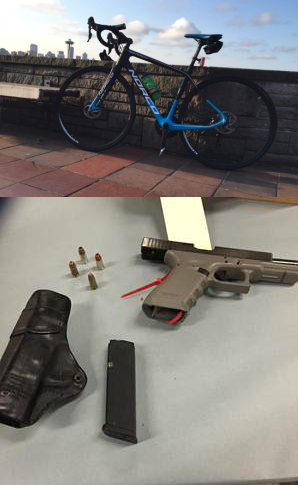 After Seattle Police staged a sting to recover a stolen bicycle posted for sale on Craigslist a few weeks ago, they pushed the lead further and found even more stolen bikes and even a stolen handgun, according to the SPD Blotter.

The bust began in late July when detectives staged a Craigslist deal with a person selling a stolen bike. The thief had already pawned the reportedly $3,500 bike for $400 at a Shoreline shop (and I’m sure the shop HAD NO IDEA IT WAS STOLEN), but bought it back from the pawn shop to sell it to the officer for twice that much.

Detectives arrested the suspect and returned the bike to its owner.

This time they arrested two people who police say were involved in the same theft ring as the man arrested in the previous sting. Those arrests led them to a storage locker with ten more bikes (six of which had been reported stolen), some meth and heroin, and a stolen Glock pistol.

Here’s the theft victim’s version of events, as related to Bike Index:

A Bike Index user found my bike for sale on OfferUpNow and alerted me. I contacted the seller … and he had me meet at the public storage building at Mercer and Fairview. I was able to have SPD detectives bring me along with them, and they ended up making a big arrest. A crime ring leader who had assault charges and other felonies was the one who had the storage space with many other stolen bikes. The police were able to find my bike in the storage unit and return it to me.

It’s a sad reminder that the money from bike theft fuels some more serious problems. It’s great to see Seattle Police helping people recover their bikes, which is a worthy end in itself. But we also need to address our more deep-rooted social ills. Bike theft is really just one more symptom of those larger problems.

Detectives arrested a man [July 28] after he posted a stolen bike for sale on Craigslist.

A Seattle Police Major Crimes Task Force detective began investigating after the victim of a bicycle theft saw his bike advertised for sale on Craigslist. The victim’s bicycle had been stolen earlier in the day from a secured parking garage in lower Queen Anne. The same thief had been caught on camera multiple times before.

Detectives contacted the suspect who posted the Craigslist ad hoping to set up a meeting; unfortunately, he had already sold the bike to a pawn shop in Shoreline. He agreed to meet and buy the $3500 bike back to sell it to the detective knowing he could get more than the mere $400 the pawn shop gave him. (Only the suspect could buy back the bike because a pawn shop must put any item it buys on a 30-day hold before putting it up for sale.)

The suspect repurchased the bike from the pawn shop and then sold it for $850 to the undercover officer.

With the help of the Shoreline Police Department, the suspect was arrested and booked into King County Jail for trafficking in stolen property.

The bicycle was returned to the victim.

And here’s the update posted after the second bust:

Detectives began working with another victim of a bicycle theft who found his bike for sale on the website OfferUp. An undercover operation was set up to purchase the bike which resulted in the arrest of two suspects involved in the theft ring connected to the suspect arrested [in late July].

Detectives obtained a search warrant for a storage locker in the 700 block of Fairview Ave. N associated with the suspects. They recovered ten bicycles, six of which were reported stolen. Two have already been returned to their owner; one worth $2500 had been stolen in a car prowl on Capitol Hill and the other worth $3700 was stolen in a burglary in North Seattle. Inside the storage locker detectives also found a Glock pistol that was stolen in a burglary in 2010 and over 30 grams of meth and heroin.

This entry was posted in news and tagged bike thefts, craigslist, OfferUp, spd. Bookmark the permalink.