County will close Green River Trail in sections this summer 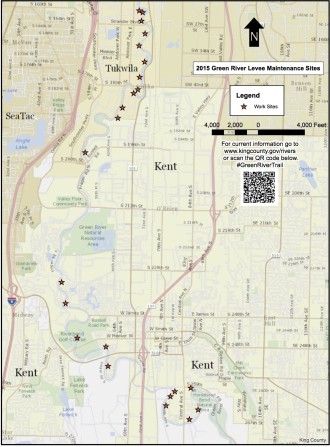 In the past decade, the Green River Trail has been closed as often as it has been open. And just when you thought it might finally be fully open, King County has announced another series of closures through the end of the year and maybe even continuing into 2016.

The trail provides crews access to work on the levy, which is obviously important work. But this trail — which provides a rare safe biking and walking connection in south King County — has been closed so often that it is simply undependable as a transportation route.

Adding to the problem, King County will not guarantee trail detours. Sometimes you’ll get a detour, sometimes you’ll be spit out onto dangerous streets without any help. The lack of a safe detour option is also a problem for people who depend on the Snoqualmie Valley Trail, as we reported recently. A reader who depends on that trail to commute summed up her frustration with the lack of detour this way:

I use this trail on a daily basis to get to and from work. I am disappointment that its being closed for five months, that is a long time. I wish that there had been more notice of this change. And it feels a little disrespectful to those who make an effort to find alternative ways to commute (good for the planet, and good for health), as there did not seem to be much thought to how to mediate this problem. (Read more…)

These trails are lifelines for people trying to get around on foot or bike. They are important parts of the region’s transportation infrastructure, and they need to be treated as such. This means finding a way to provide quality detours, even if that means making space on nearby streets or highways.

Different trail segments will be closed for periods ranging from a few days to a few weeks as crews move through the system doing this important maintenance work.

Trail closure signs will be posted on either end of the work areas. In some cases alternate routes will be recommended while in others they will not be available.

During maintenance work, heavy trucks and equipment will be operating on the levee maintenance road that also serves as a recreational trail along the Green River in the cities of Tukwila and Kent. Work will include removal of stumps, dense hedges, fences and debris and replacement of stormwater outfall structures.

In order to ensure the safety of trail users and work crews, trails users are asked to abide by these trail closures. Every effort will be made to minimize the amount of time each trail segment is closed.

Founder and Editor of Seattle Bike Blog.
View all posts by Tom Fucoloro →
This entry was posted in news and tagged green river trail, king county. Bookmark the permalink.