Swift Industries wants you (yes, you) to lead a bike camping overnight 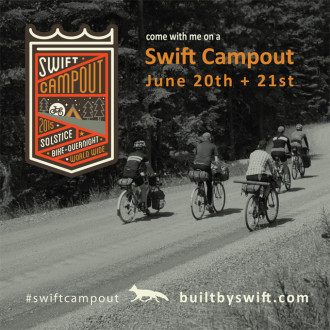 Seattle is blessed with several bike camping destinations within a day’s ride. Throw your bike on a train, and you can reach even more places without using a car.

That’s what inspired Seattle-based Swift Industries (a longtime Seattle Bike Blog sponsor) to launch Swift Campout, a website and campaign to encourage people all over the city and the world to lead bike overnights June 20–21, the weekend of the summer solstice.

They are currently urging anyone interested in leading rides to check in on their website, then start gathering friends to join them.

“The thought of hundreds to maybe thousands of people out having a bike camping experience is amazing to me,” said Swift owner Martina Brimmer. The site has only been live for a couple days, and 115 people are already registered as of press time. “To designate one day makes it feel like it’s really attainable.”

Brimmer’s company makes stylish bags for carrying stuff on your bike, but they’re also focused on selling the experience of bike adventure.

“We make these bags so that people have these experiences,” she said. That’s why they host Get Lost Academy events to teach bike adventure tips. Saturday’s class is on camp stove and backcountry cooking. The April 18 class is on trailside mechanic tips.

If you have never been camping by bike, you are in for an amazing experience. Much like the first bike trip to the grocery store or the first bike ride to your job, the first bike camping trip opens up the world to you and your bike. Knowing that you can get so far while hauling your camping gear and using only your own power is simply empowering. And Brimmer is an evangelist for the power of bike adventure.

“Your bicycle is the perfect vehicle to just step away, even for just a day or a weekend,” she said. “It’s a simple way to get out of the city and hit the refresh button.”

And getting out of town by bike is a very different experience than driving to go camping.

“There’s something particularly rewarding about not filling up your car with all kinds of stuff,” she said. “It’s the experience of going to a place rather than just arriving.”

Swift Campout is a way to encourage people to give it a try, and for people with bike camping experience to invite friends who haven’t tried it before. Your route and destination is totally up to you, and the website is more of a way to encourage you to organize a trip. They urge you to make your trip self-supported and to leave no trace, of course. If you leave town June 20, you may want to put your clothes back on first. Or not. I suppose that’s up to you.

If you want more local destination ideas and tips, pick up a copy of Cycling Sojourner Washington. Come to think of it, Brimmer and her partner Jason Goodman contributed to the book. They are really into bike adventure.

Or you could take Sarah Burch’s Basics of Bicycle Touring class at North Seattle Community College. Yes, that’s really a class. How cool is that?

Appointed Navigators, influential individuals and independent companies who have been recognized for their involvement in the resurgence of bicycle travel are being called to lead a Swift Campout. The role of the Navigator is to band together a group of riders, create a route, and celebrate bicycle camping. To nominate a Navigator, please email [email protected].

Swift Industries dealers around the world are gearing up to participate in a Swift Campout with their staff and clientele to kick-start the bicycle touring season by hosting local bike-overnights.

11 Responses to Swift Industries wants you (yes, you) to lead a bike camping overnight