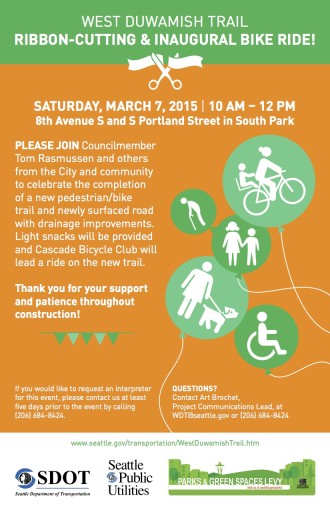 As we reported previously, the South Park neighborhood now has a way better connection to the Duwamish Trail.

You can join community members, Councilmember Tom Rasmussen and other city officials for an opening celebration Saturday. Meet 10 a.m. at the super cool little park at S Portland Street and 8th Ave S.

Cascade Bicycle Club will lead an inaugural bike ride, so bring your wheels.

The trail is relatively short, but it makes an important connection between the neighborhood and the regional trail system, and it sets the stage for more neighborhood biking and walking improvements. South Park has largely been neglected when it comes to biking and walking investments, but the new South Park Bridge and this new trail segment are good signs that the city is trying to correct that.

The trail is also notable for how many different agencies and needs combined to make it happen. It helped industry in the area by repaving what was one of the worst-paved streets in the entire city. It helped walking and biking by creating a new trail separated from that truck traffic. It helped increase access to the awesome little park on the corner of S Portland and 8th Ave S, which overlooks areas of the Duwamish River that is finally getting much-needed environmental cleanup work. 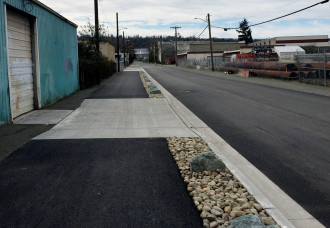 Seattle Parks, Seattle Public Utilities and SDOT all partnered to make it happen.

More details on the celebration, from the city:

The Seattle Department of Transportation recently completed an extension of the multi-modal West Duwamish Trail in the South Park neighborhood. The Seattle Department of Transportation invites the public to join Councilmember Tom Rasmussen, city leaders, community advocates and others for the opening celebration on Saturday, March 7.  In addition to the bike trail, the project includes other much needed improvements in South Park—the installation of a storm drain system and the improvement of a previously unpaved section of South Portland Street. The work was a combined effort among SDOT, the Seattle Public Utilities and the Seattle Department of Parks and Recreation.

The event will begin with remarks from city leadership, followed by a ribbon cutting and light refreshments. Cascade Bicycle Club will lead an inaugural bike ride starting on the new trail segment and continuing into the South Park business district.

The north end of the Duwamish Trail connects with Alki Trail and the West Seattle Bridge trail. The new section extends the trail to the south, from South Holden Street and Second Avenue South to the paved roads in South Park that lead to the Green River Trail. It is a multipurpose pathway – dedicated to both bicycles and pedestrians – that creates a safer environment for all modes of travel including vehicles, pedestrians and bicyclists.

“This project advances our goal of providing pedestrian and bicycling facilities that serve all ages and abilities,” said SDOT Director Scott Kubly. “Is also furthers our goal of improving connections around the city and the region”

The West Duwamish Trail Project began in 2008 when it was identified by the Park and Green Spaces Levy. The South Park Neighborhood Association applied for a grant from SDOT’s Neighborhood Street Fund program to extend the trail on Eighth Avenue South.

Construction for the most recent trail extension began in July 2014 and was substantially complete in mid-January. This work was largely funded by the 2008 Parks and Green Spaces Levy, Seattle Public Utilities, SDOT’s Street Maintenance Division and the Bridging the Gap transportation levy.

For more information on this project, visit www.seattle.gov/transportation/WestDuwamishTrail.htm .

Founder and Editor of Seattle Bike Blog.
View all posts by Tom Fucoloro →
This entry was posted in news and tagged duwamish trail, south park, tom rasmussen. Bookmark the permalink.