Have you found the yellow ‘unicorn’ Pronto bike yet? 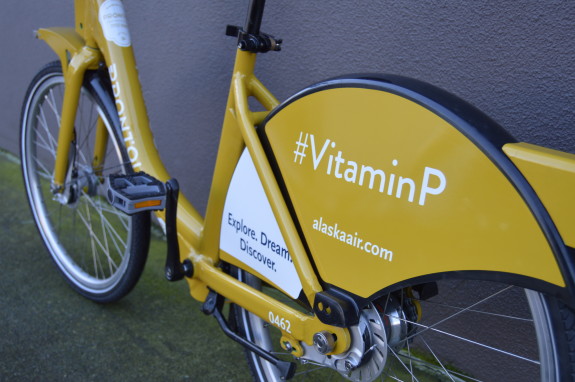 Pronto Cycle Share has launched its first “unicorn bike.” It’s a new marketing scheme and game where they put one special yellow bike into circulation and encourage people to post on social media using the hashtag #VitaminP when they find it.

It’s rainy and grim out, so the yellow bike is supposed to be like a little bit of sunshine. Riding a bike can help but cheer you up, so it’s like medicine in a Seattle winter. It definitely works that way for me.

While this unicorn bike is solely promotional for Pronto, the concept could also be used for sponsored marketing campaigns. For example, when I was last in Chicago, I found the Divvy #blackhawksbike, which promoted the start of the NHL team’s season. It was surprisingly fun to find the one bike that is different than the others. I even had some guy in a pickup roll down his window next to me and congratulate me on finding it (I thought he was gonna yell some anti-bike stuff at me, so that was a pleasant surprise).

Now, I must find the yellow Pronto and ride it. Rain be damned.

UPDATE: Here’s an update on Pronto usage in the 15 weeks since it launched:

16 Responses to Have you found the yellow ‘unicorn’ Pronto bike yet?