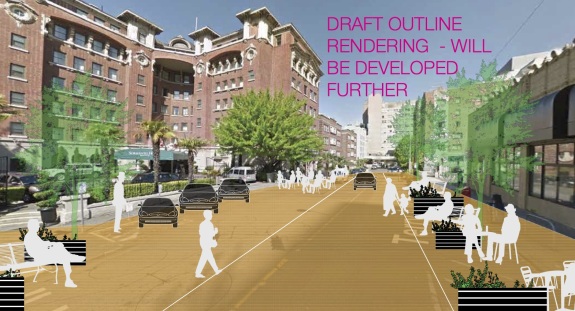 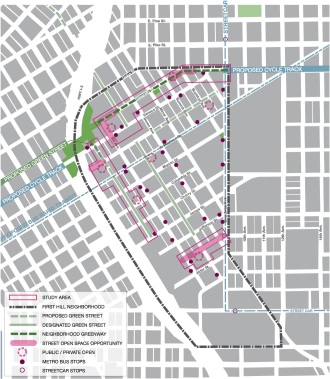 The First Hill neighborhood is densely packed with jobs, homes and vital city services. But other than Freeway Park, it’s largely lacking in quality public open space where folks can gather or just take a load off. The First Hill Public Realm Action Plan is a bold way to change that, and at relatively low cost compared to buying lots and building traditional parks.

If you like these ideas or want to learn more about the plan, swing by Town Hall between 5 and 7 p.m. Wednesday for an open house. Details here.

Being such a dense neighborhood so close to downtown, nearly all First Hill residents walk, bike or take transit most often to get around. This presents a great opportunity for providing public open space at a low cost: Redesign some of the street space.

Sometimes, this might mean designing people-focused streets, like the Terry Ave image at the top of this post. In that concept, car access and some parking would remain, but more space would be allotted for people on foot, and traffic would be calmed to a slower and safer speed. Slower traffic and space for some benches and planters and such would go a long way to making living or taking a work break near Terry a more pleasant experience.

In other cases, street ends and low-priority intersections could be closed off and turned into small plazas or parks. The most developed example in the action plan is at the intersection of University, Union and Boylston: 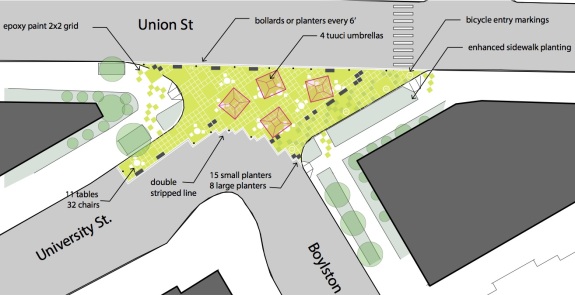 This is not a vital intersection for traffic flow, and it’s overly complex for a mostly residential area. So the plan suggests closing it off to motor vehicles and creating space to gather with neighbors or just sit down. It would also have space for bikes to pass through and would likely reduce traffic volumes, making the streets more comfortable for all users. Here’s what a public plaza could look like there: 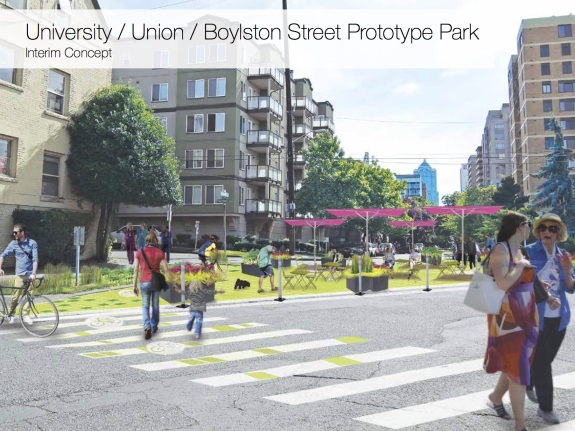 Best yet, the city is already eying this location for a pilot using low-budget materials like plastic bollards and paint to create the public space and test it out, reports Gordon Werner at the Urbanist (who is also a member of the First Hill Improvement Association):

Four concepts are currently being studied. DPR is planning a prototype park to be located at the intersection of Union St, University St, and Boylston Ave in order to test concepts and gauge the neighborhood reaction/opinion. A Street Scrabble tournament was held at this location, to much success, this past summer. SDOT would develop this plan with allocated funds in conjunction with DPD and DPR, as soon as this spring.

7 Responses to Lacking open space, First Hill looks to create space for people in the streets