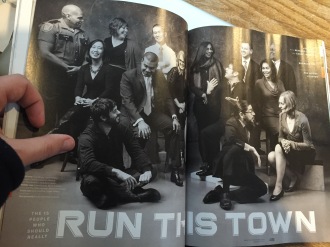 Photo by Brandon Hill. You’ll have to pick up a copy of the January 2015 issue to see it all (or check it out online here)

My mother wants me to send her “at least three copies” of the January 2015 issue of Seattle Met. That’s because the magazine and its political news arm Publicola named me one of 15 “game changers who will spend 2015 addressing the biggest challenges facing Seattle.”

I’m honored to be included in this list, which is packed with awesome people. You can read about all of them online or go out and pick up a copy.

The short profile talks about how I started my career in journalism at a terrible time to try to get a job in that industry (I graduated from college in 2008, when newsrooms were closing or hemorrhaging jobs in Seattle and around the nation). But, the profile notes, I “created a niche of his own: Seattle Bike Blog.”

Of course, it’s rather silly to give me all the credit for that. Seattle Bike Blog only exists because of our local sponsors and, critically, support from all of you who give a bit of your hard earned cash each and every month through our paid subscriber program. I cannot thank you enough. Everyone who reads and leaves comments or sends news tips is vital to keeping this site going.

But perhaps most importantly, the blog would be pretty boring if all you great bike leaders and inspirational folks were not out there doing great stuff worthy of writing and reading about.

I am just the lucky dude with the best job in Seattle: Writing daily about bikes and how they are making our city better. Thanks for reading, everyone. Here’s to an awesome 2015 on two wheels.

This entry was posted in news and tagged publicola, seattle met. Bookmark the permalink.