Jaywork: Ever had a bike stolen? You’re not alone. Here’s what probably happened to it 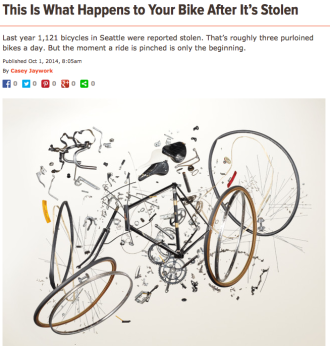 It’s a long read, but it’s good. Here’s an excerpt:

To the prepared thief, every bike rack is a buffet. You think a cable lock will keep your beloved wheels in your life. The thief knows a simple pair of aviation snips cuts through that cable like butter. You’re convinced a locker-style combination lock will outsmart a crook. He pops it in seconds with a shim—just slides it in between the body of the lock and its fishhook tip, and your bike is his. (A good bandit can make a shim in about five minutes with nothing more than a beer can and a pair of scissors.) U-locks? Routinely opened with a Bic pen jammed into the keyhole. Even with that rare unbreakable lock, a bike is no safer than its anchor; outside Guthrie Hall at the University of Washington sits a metal rack that bike thieves have sawed straight through.

The components, meanwhile—the lights, seats, handlebars, derailleurs, and brakes that turn a frame into a ridable bike—can go for hundreds of dollars each on the black market. With no serial numbers, these parts, unlike frames, are untraceable. “As long as you’ve got the proper tools,” Justin, a University Avenue fixture who has swapped stories with more than one bike thief and asked that his last name be withheld, explained, “you can just walk up to a bike and be like, ‘I want those rims, I want those handlebars, I want that seat.’ ” A buffet.

Not that your bike is safe indoors. Whitney Rosa, a customer service manager at a medical firm and self-described “avid bike commuter,” thought the locked communal storage room of the Capitol Hill condo building where she rented an apartment was secure until her $8,300 Seven Mudhoney disappeared on December 31, 2011.

Her ride, with its custom titanium frame painted like a pair of blue and brown argyle socks, became one of 824 reported stolen bikes in Seattle that year, according to city data (by 2013 the number rose to an annual 1,121, three per day on average). Had police given it to her straight, Rosa would have learned that only 1 percent of stolen bikes make it back to their owners. And thieves rarely get caught in the act. Someone leaning over a bike to unlock it looks pretty much the same to passersby as someone leaning over a bike to hack or cut its lock. And as Rosa now realized, inside storage isn’t necessarily better.

Founder and Editor of Seattle Bike Blog.
View all posts by Tom Fucoloro →
This entry was posted in news and tagged bike thefts, casey jaywork, seattle met. Bookmark the permalink.

6 Responses to Jaywork: Ever had a bike stolen? You’re not alone. Here’s what probably happened to it