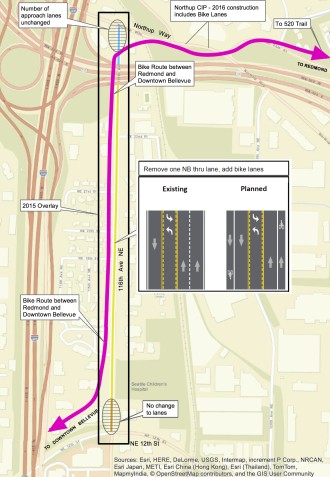 Noting that traffic levels are not high enough to need two northbound lanes, the City of Bellevue has proposed bike lanes on a segment of 116th Ave NE between NE 12th St and Northup Way.

This project would help improve a key bike route connection between the 520 Trail, Redmond and beyond into downtown Bellevue. It would also connect planned bike lanes on Northup Way (scheduled for 2016) to the NE 12th Street bridge, which provides a rare quality bike crossing of I-405. Since crossing freeways is often the biggest challenge to getting around on a bike, this is a smart connection for Bellevue to make.

The project, which could be completed in 2015 if all goes according to schedule, would also have essentially zero trade-offs. Traffic studies show that the street only carries 11,000 vehicles per day, about half the number that can be comfortably carried by the proposed three-lane street design (plus more in the new bike lanes). The street currently has two northbound lanes but only one southbound lane despite the fact that travel is essentially equal in each direction.

“The volume occurring now in the northbound direction can be readily accommodated by only one through lane, as evidenced by the single southbound through lane today,” the Department of Transportation said in a memo to the Council last week. Redesigning the existing street is also a very cost-effective way to make the bike route link.

Nonetheless, the project has received pushback from Deputy Mayor Kevin Wallace, according to Bellevue Reporter.

“Wallace said the proposal makes no sense when considering other projects in the Bel-Red corridor that are planned to increase capacity and what safety challenges could be created for nearby hospitals and firefighters using that stretch of road,” Bellevue Reporter reports.

Wallace’s concerns are all addressed in the DOT’s memo. The project won’t affect the ability for the road to carry a huge growth in traffic (assuming there even is any, since traffic has been on the decline in recent years). And, of course, a three-lane street design is much safer for all road users than the current four-lane design. Here’s the explanation from the Bellevue DOT:

Secondly, pedestrians would realize a safety benefit from the planned project by having fewer vehicle lanes to cross. With the overlay design, staff is evaluating the potential addition of a marked crosswalk mid-segment in the NE 19th Street to NE 21 Street vicinity (there currently are no marked crosswalks between NE 12th Street and NE 24th Street). Having a single through lane in each direction with a center turn lane affords a safer crossing for pedestrians than the current conditions, where two through lanes can result in what is called a “multi-lane threat”. In the multi-lane threat situation, one motorist stops to yield for a pedestrian crossing in the marked crosswalk while another motorist comes alongside the stopped vehicle in the second through lane and their line of sight is blocked by the initially stopped vehicle. These multi-lane threats are a serious safety concern for pedestrians and the Transportation Department takes great care to address these where marked crosswalks exist. As the design of the overlay plans progress, the exact location and treatment of a marked crosswalk will be developed to improve pedestrian safety to the greatest extent practical.

Pedestrians will also benefit from the addition of a buffer space from motorized vehicle traffic by having the bike lanes next to the existing narrow sidewalks (which, along much of the corridor are directly adjacent to the curb, with no planter strip to provide a buffer).

Cyclists will benefit from the addition of bike lanes in the corridor. The bike lanes will create designated areas for cyclists, moving them out of general vehicle lanes and reducing the friction and stress that can accompany sharing a lane with faster-moving motor vehicles. Motorists will benefit by having bicyclists out of the general vehicle lanes, thus removing the impediment associated with slower-moving bicyclists and reducing the sometimes awkward vehicle movements that occur as motorists navigate around slower moving cyclists.

Eastside Bicycle Routes will be voicing their support for the plans at the Bellevue City Council meeting tonight (Monday), 6 p.m. at Bellevue City Hall. Anyone who can get there is encouraged to attend and voice your support.