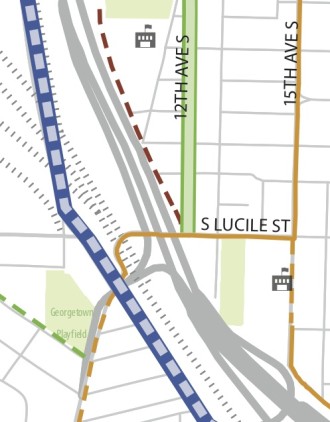 An eight-year-old was struck while crossing Airport Way at Corson Ave and the Lucile Street overpass around 3:30 p.m. His 12-year-old friend saw the collision and rode over to help, but a different person driving through the intersection hit him.

The eight-year-old was not seriously injured, but the 12-year-old was transported to the hospital with a possible broken leg.

The intersection is a key connection between Beacon Hill and Georgetown, and the Lucile Street overpass has a walking and biking path leading to a recently-completed neighborhood greenway on 12th Ave S.

But once in Georgetown, the walking and biking environment becomes much less developed. Sidewalks are often in bad shape or missing and there are few quality bike lanes. Access around the playfield is particularly bad.

The Bike Master Plan calls for protected bike lanes on Airport Way and bike lanes on Corson, an unnecessarily scary street that feels more like a highway on-ramp than a neighborhood street.

Best wishes to these kids. I hope they heal up fast and get back on their bikes. I also hope the experience wasn’t too scary for them. Kids shouldn’t need to be afraid of their own streets.

The first child—an eight-year-old boy—was struck as he rode across Airport Way S. The boy suffered minor scrapes, but was not seriously injured.

The second boy, a 12-year-old, witnessed the collision and began riding across Airport Way S. to aid his young friend. As the 12-year-old crossed the street, he, too, was struck by a second car.  The 12-year-old was thrown from his bicycle in the collision, leaving him with a possible leg fracture.

The Seattle Fire Department treated the 8-year-old at the scene and transported the 12-year-old to Harborview Medical Center for further evaluation.

Officers are interviewing both drivers about the two collisions, and are asking anyone who may have witnessed the collision to call 911 or 625-5011. So far, police do not believe drugs or alcohol were a factor in either collision.