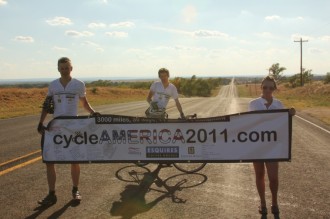 Bike touring is an amazing way to see a place, and touring in Washington State is among the best in the country. But two international groups on long bike trips ran into some terrible situations in the Puget Sound region in recent weeks.

A man from England who was on day number one of what should have been a bike tour down the west coast was struck and seriously inured near Shelton August 10. He was airlifted to Harborview after a pickup allegedly swerved to avoid another car and struck him on the highway shoulder.

According to a friend he was riding with who was tracking their travels on his blog, Steven Prime was left with a lot of broken bones but “nothing that will be long term.” Still, it’s a terrible and quick end to their tour. We wish Steven a speedy and full recovery.

After insulting my digestive system with a “breakfast sub” that contained steak and cheese the next ferry was arriving an hour and a half later and we boarded en route to Bremerton. The ferry ride was awesome.. as we sailed away we could see the Seattle Skyline and it was a beautiful sight.. with fresh sea air, jellyfish and a dog on the boat trying to sniff my leg it had it all… but an hour later we arrived into port and it was time to get back on the bikes. Hour and a half behind schedule Steve and I got a good start on the day and soon smashed out the first 37 miles.. to a town called Shelton. Here was our meeting point with Nathan and we were 40 mins early! We really got a great start on the day… We insulted our digestive system again this time with a “meatball sub” and refilled our bottles with ice… Steve was keen to get going to make up for the time we lost at the ferry port and so headed off on his own, while I waited on Nathan to turn up and would catch him up. Nathan arrives and shortly after we headed down the route to catch up with Steve… but we couldn’t find him…

We went up the route all the way until we reached a point where the road had been closed off, unsure whether Steve had gone this far we tried contacting him, but America cell phone signal is shocking and had no signal.. Unsure we tried both of the alternative routes he could have gone, but again no sign of him… The closest was a redneck on his bike carrying his scooped up roadkill for the BBQ later.. so we back tracked thinking he may have stopped somewhere and we missed him. Still no luck and nothing from phoning and texting him, we started to worry and after a few hours decided it was time to head to a police station.. As we followed the scent of coffee and doughnuts to the nearest one we got a call from Steve’s mobile and it was the hospital…which we learned the fate of Steve, in that he had been hit by a car that swerved into him at about 40mph. Arriving at the hospital all the way back in Seattle that took us 2 hours in the traffic we saw him… A broken wrist, broken bones in his lower back and 6 broken ribs he isn’t in the best of states, but luckily nothing that will be long term! His face looked better though.. ;) But unfortunately it meant that less than 40 miles into the trip, it is game over for CycleAmerica2014

Prime, a coffee shop owner in Coventry, England, was biking to raise money for the Coffee Kids charity. You can still donate to that cause via Crowdrise.

While nothing compared to Prime’s collision, an Australian couple is trying to figure out how to get back on the road after their fully-loaded bikes were stolen in Mount Vernon. The bikes were locked together outside Skagit River Brewery when some “Mutha fuckas” took them (as they put it in their blog), leaving Anna Suthers and Billy Barnetson with just the shirts on their backs only a quarter of the way through their Alaska-to-South America tour.

But KOMO reports that the couple is keeping a positive outlook and isn’t going to let the theft stop them:

Obviously, everyone should keep an eye out for their bikes, because this bike thief is worse than the average bike thief.

Details on the bikes from the Mount Vernon Police:

The Mount Vernon Police Department is seeking help from the public locating two bicycles stolen from a couple who were passing through Mount Vernon while riding from Alaska to South America.

The couple stopped to have dinner at a restaurant near South 3rd and Gates Street in Downtown Mount Vernon. The bicycles, along with their clothing, sleeping bags, tents and other miscellaneous travel items attached to the bikes were gone when they came out.

The bikes are described as:

1. Black Trek Hybrid bicycle with blue trim, 27 speed, black tires and black seat. The bicycle had two black bags on the back tire with a yellow bag above the black bags. It also had two gray bags on the front tire.

2. Black Apollo Trace 2.0 Hybrid bicycle, 24 speed, black tires, and black seat. The bicycle had two black bags on the back tire and two red bags on the front tire.