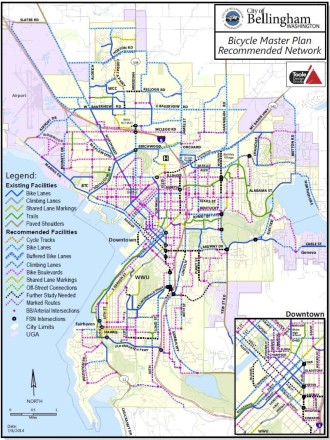 From the most recent draft of Bellingham’s bike plan. Click map for larger image of check out the full plan here.

We don’t often cover Bellingham news, since it’s just a bit outside our traditional coverage zone, but this is awesome. City leaders appear poised to approve a Bicycle Master Plan with a clear goal: Become the most bike-friendly city in Washington.

But on another level, leaders want to stay ahead of Seattle in biking levels, and they are going to rely heavily on cost-effective projects like 42 miles of painted bike lanes and 52 miles of bicycle boulevards to get there. From The Bellingham Herald:

“Bellingham already has one of the highest bicycling and walking rates in the entire state,” consultant Peter Lagerwey told the council on Monday, Aug. 11. “So when you implement this plan, you’re just going to blow everybody off the charts and be No. 1.”

The majority of the network improvements will be bicycle boulevards on residential streets (similar to Seattle’s neighborhood greenways) and more painted bike lanes, though there will be some buffered bike lanes and very few cycle tracks (AKA protected bike lanes).

A Bellingham Herald politics reporter tweeted the details from a recent briefing to the council:

Because Bellingham is a smaller city and will rely heavily on these lower cost measures, their entire plan comes in around $20 million. By comparison, Seattle’s updated Bike Master Plan includes many miles of protected bike lanes and has a price tag in the neighborhood of $450 million.

Seattle is more dense and busy, and investing in protected bike lanes is needed to attract the big numbers of residents who do not feel safe biking in many of the city’s paint-only bike lanes. Bellingham is focused on creating a network of bike routes that will be comfortable for people of all ages and abilities mostly through the all-new bicycle boulevards.

The Herald makes the claim that Bellingham is already more bike-friendly than Seattle, but they are really essentially tied at about 3–4 percent according to (flawed) Census commute data. Due to the Census survey’s margin of error, Seattle is ahead of Bellingham in the one and three-year estimates, but Bellingham is ahead in the five-year estimate.

In fact, if Bellingham wants to be the top bicycling city in Washington, they should forget about Seattle and try to catch Port Townsend (5 percent) and Ellensburg (8 percent). If the city passes and invests in their bike plan, they could very well get there.

And in addition to bragging rights, they will have a healthier, safer and more livable city.

Founder and Editor of Seattle Bike Blog.
View all posts by Tom Fucoloro →
This entry was posted in news and tagged bellingham. Bookmark the permalink.