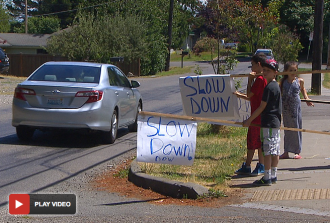 The culture of driving in America has little regard for people outside of cars. That’s not to say that people who drive are bad people, it’s that we collectively consider actions —such as not stopping to let someone cross the street — to be socially acceptable behavior.

Most people learn to just assume people won’t stop for you, especially if there is no marked, zebra-stripe crosswalk. It’s been that way for a long time, and a cultural norm is hard to change.

But this is not OK. And like so many cultural problems, it sometimes takes the perspective of a child to see just how wrong we are.

That’s why this KOMO report from Northgate has been replaying in my head ever since I saw it. Especially the perspective of the young girl at 0:38 who simply cannot understand why someone would not care enough about her to stop so she can cross the street. Because she’s right. What an awful thing to do to a person! If only we were not so numb and used to it, we’d all have the same response.

Streets are places, and people live their lives in and around them. They are not pipes for cars. Maybe we’ve all forgotten that, but these kids should be a reminder that we have to change the culture even if that’s hard to do. That’s what safe streets are really all about.

Founder and Editor of Seattle Bike Blog.
View all posts by Tom Fucoloro →
This entry was posted in news and tagged komo, northgate. Bookmark the permalink.