A statistical analysis of biking on the Fremont Bridge, Part 4: Are more people biking?

EDITOR’S NOTE: This is the final post in a four-part series of posts this week by statistician Mike Logsdon. Mike bikes across the Fremont Bridge every day, and put together this analysis of the bike counter data “mostly for the amusement of friends and coworkers.”

Are More Seattleites Bicycling Across the Fremont Bridge? The short answer: Probably.

It’s tough to make any emphatic declarations from 18 months worth of recorded trips, as we have to investigate trends net of seasonal and weather effects. Once again we consider residual ridership — the difference between observed crossings and the number expected given season and weather. Time trends in Fremont Bridge bicycle crossings should manifest themselves as time trends in the residual trips. If daily crossings are growing, then the expected counts will exceed the observed counts at the beginning of the monitoring and reverse at the end of monitoring. If there is no time trend in bicycle crossings, then the residual trips should simply scatter around zero with no pattern.

Figure 6 shows the residual trips, plotted against date. A slight time trend revealed itself, to the tune of a 140 rider per day per year increase. This estimate, however, is extremely imprecise. Any time trend in ridership is simply small compared to the day-to-day variability in bicycle trips, given the duration of the observations. 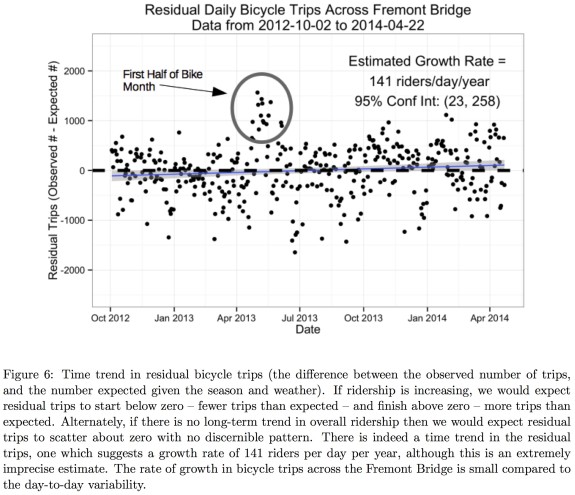 Winter workdays saw on average 2,000 daily crossings. Summer workdays saw on average 4,000 daily crossings. Peak commute times were 8 a.m. to 9 a.m., and 5 p.m. to 6 p.m., with hourly total crossings peaking between 600 and 800 on the nicest days. Seattleites talk a mean game, but left their bicycles parked on the rainiest days. Cascade Bicycle Club Bike Month energized commuters early, but many participants lost interest by the end of the month. Bicycle crossings have probably been increasing by somewhere in the zip code of 100-200 additional riders per day per year, but it’s hard to know for sure due to the large variability in daily commute crossings relative to the duration of the observations.

11 Responses to A statistical analysis of biking on the Fremont Bridge, Part 4: Are more people biking?