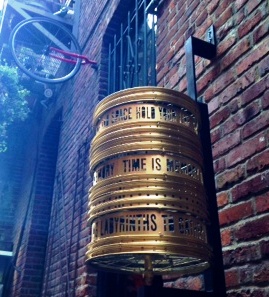 Opening tonight in a Pioneer Square alley: Five kinetic sculptures inspired by riding bikes. Or in the words on the New Mystics’ blog, the sculptures are “drawn directly from our oneiric experience of freedom — riding bikes. Cycling represents a slowing down of machine time, liberty from clocks and bus schedules, and a human powered traversal of terrain — it is also a metaphysical meditation.”

The installation is having a grand opening party tonight as part of the First Thursday Art Walk. So if you’re around and can get there on such short notice, folks will be talking bikes, listening to music and going for a bike ride from 5–8 p.m. in Nord Alley near Back Alley Bike Repair.

If you can’t make it to the party, swing by sometime to check them out.

Some of you may remember the totally awesome 2012 “Diving Belles” installation in the same space by Artist Kyler Martz and UW Architecture student Jason Duckowitz. It was well-loved, but sadly short-lived due to vandalism. It’s great that more artists are giving the concept another try in the quirky and busy Pioneer Square alley.

More details from the New Mystics:

Presented by New Mystics with support from Back Alley Bikes

New Mystics presents a new body of 5 kinetic sculptures drawn directly from our oneiric experience of freedom – riding bikes. Cycling represents a slowing down of machine time, liberty from clocks and bus schedules, and a human powered traversal of terrain – it is also a metaphysical meditation.

Give “PRAYER WHEEL” a spin next time you ride by and release the energy of the cyclist prayers inscribed on the wheel. Composed of discarded BMX wheels, “PRAYER WHEEL” references a traditional Buddhist prayer wheel and features poems written by the NM members, “PRAYER WHEEL” is an interactive missive sending an endless stream of good vibes into the universe.

“PRAYER WHEEL”, through the grace of Nord building owner Todd Vogel and the support Back Alley Bikes, will remain permanently installed in Nord alley to continue sending positive messages through the cyclesphere in Seattle. New Mystics is excited about making a lasting contribution to a community that has empowered and entertained us so long….

NM would like to thank Davis Sign Company for their support in engineering and constructing NATURAL MOVEMENT.

On June 5 New Mystics will host 3 hours of  cycling centered conversation and live music featuring NM members Specs One, Wizdumb, and the dj team Phone Sex Operators. Join us for FREE in Nord Alley from 5 – 8 pm to celebrate the installation of the NATURAL MOVEMENT show. There will be surprises, and a group ride out to sunset somewhere….