This summer, you have (at least) two chances to bike to multi-day music festivals

Forget the traffic jams and expensive parking, this could be the summer biking to muti-day music festivals really takes off in the Seattle area.

You have at least two chances to party car-free this summer, with the Timber! Outdoor Music Festival in July and the Gigantic Bicycle Festival in August. 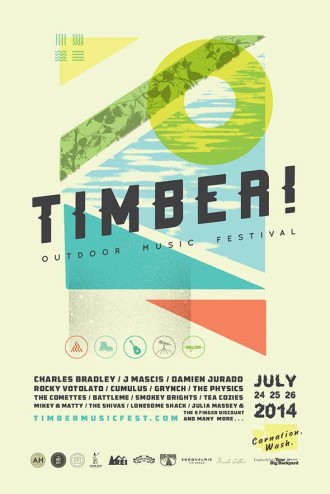 The Timber! Outdoor Music Festival happens to be hosted in one of the area’s best bike camping destinations: Tolt McDonald Park in Carnation.

A group of people biked together for last year’s inaugural festival, but this year they are getting organized and inviting festival goers to meet up at Gas Works Park to bike the 42-miles to the park.

The best part is that ride organizers are hoping to draw in first-time bike campers. So if you love music and have been interested in the idea of bike camping, this seems like a great way to jump in and give it a shot. From ride organizer Eric Sullivan:

Timber! is “only” 42 miles from Seattle, and on a fairly straight-forward route, and being that it’s located at a well-run facility next to a town with amenities and supplies makes this something that hopefully lots of folks will see as an opportunity to try bike-camping for the first time. We just want more people to feel comfortable with the idea of traveling to a multiple-day music/camping festival via bicycle, so we’re doing everything we can to get folks who might be sitting on the fence to give it a shot.

How cool is that? If you’re interested in joining the ride, RSVP via Facebook so they have an idea of how many people to expect. The ride is free, but you should probably buy a festival ticket before they sell out. 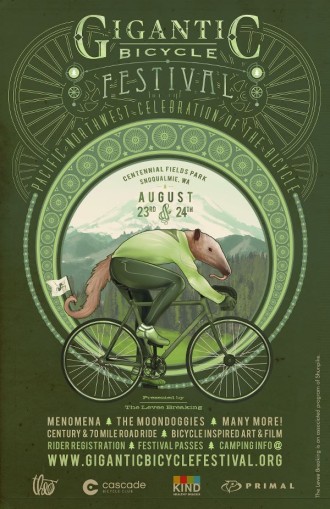 The Gigantic Bicycle Festival is a music and arts festival that bills itself as the “Pacific Northwest Celebration of the Bicycle.”

So, obviously, you should bike there! It’s held in Snoqualmie, and there will be very organized rides leaving Magnuson Park August 23. You can choose between the 77-mile and Century routes.

The organized, supported rides cost $100, including a campground. Or you can get a weekend pass and campground for $30 and just bike the 23 miles or so from Seattle to the festival on your own.

Here’s how bikey this festival is: You can bike to the bike festival and see Cycle Pronto Executive Director Holly Houser’s band Gibraltar play a set.

For registration info and a look at the lineup, check out the festival website.