Traffic violence in the Pacific Northwest is racially biased

If you are Native American in Washington State, you are almost four times more likely to die in a traffic collision than the general population. If you are black, people driving are half as likely to stop for you in a crosswalk.

These disturbing facts come from two reports this week that shine some light on the racial imbalance among victims of traffic violence in the Pacific Northwest, especially people who are killed while walking.

KPLU reported on a remarkable fact in the State of Washington: Native American residents are much more likely to be hit by a car while walking: 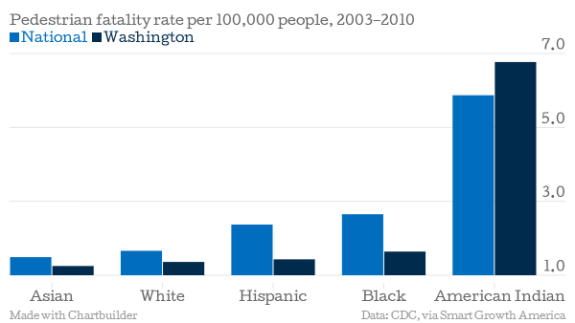 Native Americans make up 8.4 percent of all Washington walking deaths, despite making up less than 2 percent of the total population. This might even be a low estimate, since many tribes do not report traffic statistics that happen on their sovereign land.

And the traffic violence gap is getting worse, KPLU reports:

“The gap, unfortunately, is widening,” said MJ Haught, a program manager and tribal liaison for the Washington Traffic Safety Commission. Over the course of the past few decades, Haught said, the rate of Native American fatalities went from about 2.4 times that of the general population to 3.3. And in 2013, she said, “the data told us that Native American fatalities are 3.9 times higher than the general population. This is obviously not the way we want to go.”

It’s difficult to determine exactly why the rate is so much higher. KPLU reports that it is probably some combination of rural roads without a safe space to walk and the disproportionate poverty rate among state Native American populations. Low income people are much more likely to depend on walking than people in any other income bracket.

Many tribes are taking steps to try to address the problem. For example, the Confederated Tribes of the Colville Reservation launched a traffic safety campaign that includes education and safer road design efforts.

A study out of Portland has revealed another disturbing racial element to traffic violence in the Pacific Northwest: People driving are half as likely to stop for a black person waiting to cross in a crosswalk compared to a white person.

Not only is this an example of clear social injustice, but as a result black people have to wait a third longer to cross the street. People of any race delayed for long periods of time while walking in a city are more likely to take risks to get across the street. While the study is from Portland, it’s probably safe to assume that Seattle has a similar problem.

More on the study from OTREC:

The study – the first examining the effects of race on pedestrian crossing experiences – found that black pedestrians were passed by twice as many cars and waited nearly a third longer to cross than white pedestrians.

Minorities are disproportionately represented among pedestrian fatalities in the United States. The Center for Disease Control reported in 2013 that in the first decade of this century, the fatality rates for black and Hispanic men were twice as high as they were for white men.

Researchers Kimberly Barsamian Kahn and Tara Goddard of Portland State University, and Arlie Adkins, of the University of Arizona, hypothesized that if minority pedestrians experience more delay at crosswalks, they might take greater risks when crossing – risks that could contribute to the disparate fatality rates.