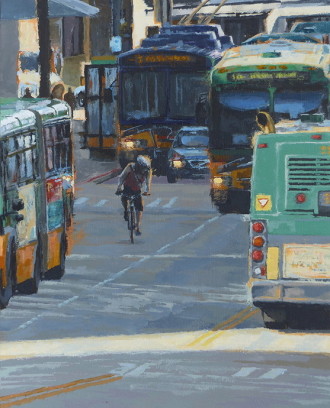 Of all the action on downtown Seattle streets, it was the “fascinating ballet” of people biking among the buses on 3rd Ave that caught William Houston‘s eye.

After painting a series of scenes from area bridges, he found that people biking were his favorite part of the scenes. From an email to Seattle Bike Blog:

After the bridges I started some more epic bustling downtown paintings of traffic. And though I enjoyed doing them, the bikes were my favorite part. I think I finally just sat and watched the madness on 3rd Ave near Pine where there is a fascinating ballet of bike commuters and buses that goes on every day. I grew up riding bikes and racing BMX before getting into mountain biking, so I am very comfortable in the saddle, but I’ve never commuted downtown like that. There’s something very intimidating about the thought of riding sandwiched between buses and cars that gives me pause.

Obviously, this is not an art blog, but his scenes highlight the absurdity that is biking downtown today. When you are on your bike and just gotta get where you’re going, you make route choices that feel most comfortable to you. A lot of people have decided that they prefer 3rd Ave because it’s relatively flat and at least the buses are mostly predictable.

But when you see the scenes through Houston’s eyes, it really looks crazy that this is the best bike route option the city has provided people who want to ride their bikes to work or the game or any of the other thousands of reasons people might head downtown. Of all the reasons why more people don’t bike in Seattle, the uncomfortable and intimidating downtown streets is probably the biggest.

But the people in Houston’s paintings don’t seem particularly worried. Maybe they’ve just become used to the way things are, so they can bike on 3rd Ave as though nothing is out of the ordinary. In the end, they are images of people making it work, even if “it” is a rather strange combination of our biggest urban vehicles and our smallest.

You can check out more of Houston’s work online at his website. You can also see it in person in the Urban Energy exhibit at the Cole Gallery in Edmonds.

This entry was posted in news and tagged 3rd ave, art, riding with giants, william houston. Bookmark the permalink.