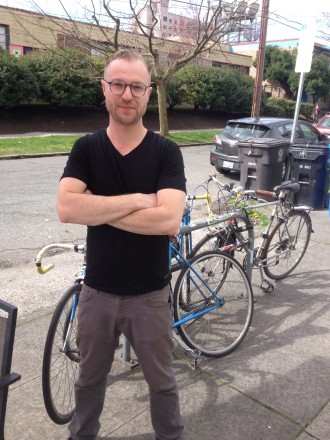 Joshua Weinberg’s car broke down a few years ago, so he decided to hop on his bike and give the half hour commute to his job in Bend, Ore., a try. He wasn’t sure what to wear, so he bought a compression-fit bike jersey from REI.

“I looked ridiculous,” he said, and his coworkers told him so when he arrived. So the next day he biked to work in a cotton t-shirt and arrived “crazy sweaty.” There’s a reason towels are made from cotton: It absorbs water well.

So he went on a search for a shirt that looks good, performs well on a bike ride and doesn’t cost an arm and a leg. Not finding exactly what he wanted, he decided to make it himself.

After experimenting with a bunch of different synthetic materials, none seemed quite right. That lead him to dependable old merino wool. Breathable, water resistant, stylish and comfortable, nothing is quite like wool.

An architect by training, Weinberg moved to Seattle and has been putting together the pieces to launch a clothing line based in Seattle and sewn in Beaverton, Ore., using New Zealand wool.

He hopes to cut costs by selling directly to customers online, Weinberg said.

You can support the venture and score a t-shirt by backing Modern Citizen on Kickstarter. They’re looking to raise $15,000 by the end of April. You get a shirt at the $48 level.

Here’s the video for the project:

Do you have a young Seattle-based bikey business you would like to see featured? Email [email protected].

Founder and Editor of Seattle Bike Blog.
View all posts by Tom Fucoloro →
This entry was posted in news and tagged business, kickstarter, modern citizen, wool. Bookmark the permalink.