Company van with tally of people walking, biking and in wheelchairs intended as joke 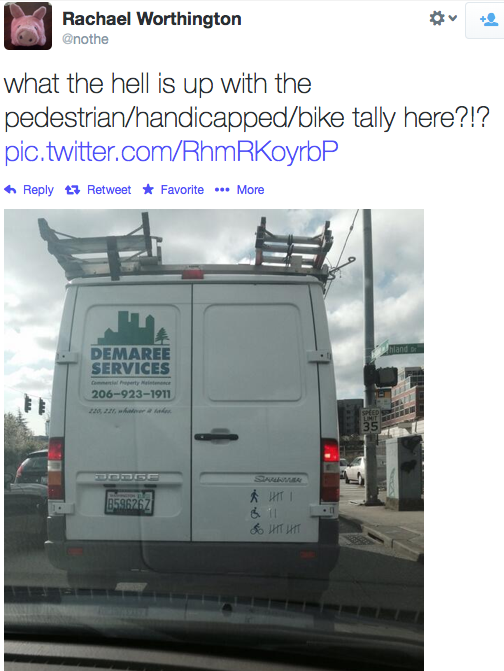 Six months ago, John Demaree was driving around town when he got an idea for a joke.

He was sitting in heavy traffic behind a car with one of those window stickers depicting stick figures of family members, sometimes even pets. But in this sticker, everyone was wearing Mickey Mouse ears (perhaps something like this).

He wanted to make a parody of it for the work truck of his commercial property maintenance business, Demaree Services. He also wanted a joke that comments on how, on the streets, “everybody is mad at everyone else driving around,” he said in a phone conversation.

The result is a decal with icons of a person walking, a person biking and a person in a wheelchair with tally marks next to them: Six people on foot, two people in wheelchairs, ten people on bikes.

But not everybody finds the joke funny. Twitter user @nothe spotted the truck and posted a photo of it, writing, “what the hell is up with the pedestrian/handicapped/bike tally here?!?”

The toll of traffic violence in our society is immense. Far too many people, both inside and outside cars, are killed or seriously injured on our roads every day. It’s hard to find someone who has not had a friend or family member killed or injured in a traffic collision. People walking, biking and with mobility issues are particularly vulnerable, and make up a disproportionate number of roadway deaths.

For many of those who have lost friends and family members to traffic violence (sometimes due to collisions with work trucks), it simply is not a joking matter.

I asked Demaree if he thought the sticker might offend people.

“Everybody that’s seen it thinks its kind of funny,” he said. “I was just trying to make a funny thing.” Though he has asked many people for their thoughts, he admitted that he has never asked someone in a wheelchair.

“I haven’t actually run over anybody, and I try really hard not to.”

Seeing the sticker and speaking with Mr. Demaree has left me with very mixed feelings. If a large company with a big media department ran with a joke like this, I would be absolutely outraged. But this is a small business owner making a joke that, unfortunately, a lot of people in our society still finds funny. Posting it on the back of their work truck is a pretty bold statement, but after speaking with John, I don’t think they actually meant to advocate violence against people not in cars.

So instead of unleashing anger at Demaree Services (though I do hope they reconsider the joke), a more important discussion is why this joke seems so acceptable to so many people. I’ve just written too many stories about people whose lives have been shattered by traffic violence to laugh it off. Cars hunting down people simply is not something I have the ability to laugh at.

But many people do.

“I get thumbs up when I’m driving down the road,” Demaree told me. “I’ve had a couple people ask if they can buy them.

This entry was posted in news and tagged demaree services, john demaree. Bookmark the permalink.

19 Responses to Company van with tally of people walking, biking and in wheelchairs intended as joke