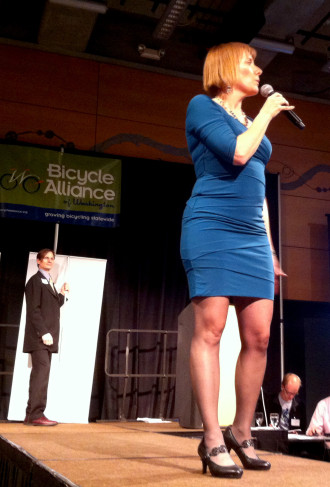 Barb Chamberlain announces the name change at the 2013 auction

The Bicycle Alliance of Washington continues to shift and grow. Under the fiery leadership of Barb Chamberlain, who has been at the organization’s helm for nearly a year and a half, the statewide advocacy organization has become more visible and focused on expanding to all corners of the state.

With a key legislative victory under its belt in 2013 (the Neighborhood Safe Streets Bill), the Bicycle Alliance is changing its name to something more active and goal-oriented: Washington Bikes.

Chamberlain explained the change during the organization’s 2013 auction Saturday, to which they graciously offered me a seat. “The Bicycle Alliance of Washington” is descriptive of the organization, but it’s not a statement of the group’s goals. And while the group has been unofficially going by “BikeWA” on social media, “Bike Washington sounded like a bike ride,” Chamberlain explained to me after the auction ended.

Washington Bikes also puts the state, not the bicycle, as the focus. Because when more people ride bikes, it is good for the whole state.

Speaking of the auction, the organization raised hella scrilla, and Representative Marko Liias gave a rousing speech in favor of bold state funding for walking and biking. Councilmember Tom Rasmussen scored a great pumpkin cake for our table during the dessert dash, so I’d say it was pretty successful night.

More details on the name change from WA Bikes:

No matter what changes, though, our work has always had one singular, inspiring vision: A future in which Washington Bikes.

The board has looked around the nation at advocacy organizations like ours and we see a growing trend: They are choosing new names that embody the goal of the organization—the very reason it exists. Groups that were initially called a coalition or a federation or an alliance have been choosing new names—strong, active statements that inspire you with the vision of what happens when our work succeeds.

As we announced at our 21st annual auction on Nov. 2, 2013, we believe a new name will both inspire people to get on board and contribute to our future growth and success. An action-oriented, goal-oriented name will invite in new partners, from individuals to businesses to entire communities, who appreciate the difference bicycling makes whether or not they ride themselves.

We’re going to make a strong statement of identity for the entire state of Washington as the culmination of all our work:

Because the Bicycle Alliance has worked every day since its founding to grow bicycling statewide, Washington Bikes. That’s the name you’ll know us by going forward, and it’s the vision that inspires us.

Where You’ll Find Us Online

Founder and Editor of Seattle Bike Blog.
View all posts by Tom Fucoloro →
This entry was posted in news and tagged barb chamberlain, bicycle alliance of washington, washington bikes. Bookmark the permalink.