Reader hit by car under viaduct not injured, but concerned about safety on temporary bikeway 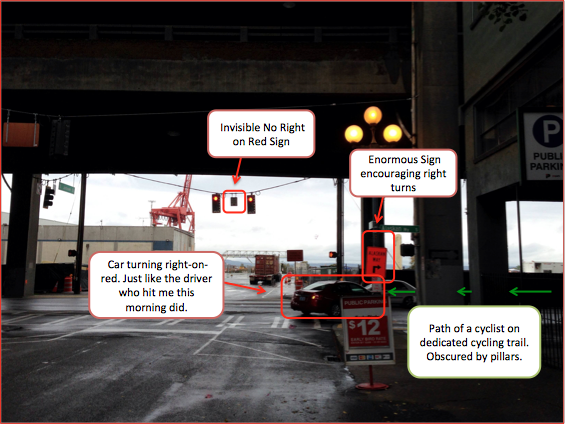 Steve Greenberg was struck by a somebody he says made an illegal right turn on red across the temporary bikeway under the Alaskan Way Viaduct.

The collision occurred Friday morning where King Street crosses under the viaduct.

He was not injured and says he is not angry at the person who struck him, who rides a bike himself and was distraught. Instead, Greenberg observed the intersection a little further and determined that it and the temporary bikeway are poorly designed. He outlines some of the issues in the image above, which he sent to city officials and Seattle Bike Blog. He is worried that as it is currently designed, similar collisions are inevitable and the next victim may not be as lucky.

Greenberg is not the first person to voice concern about the temporary bikeway. Visibility is poor, and as you can clearly see in the image above, it is difficult to tell that the bikeway is even there. This is bad for safety and makes it difficult for people on bikes trying to navigate the unfriendly construction site.

I was hit by a car this morning while traveling on the city’s bike lane underneath the Alaskan Way Viaduct.

I had the right of way. I was traveling south-bound on my way from my home in Capitol Hill to my job in Pioneer Square at 1st and King.

A car made an illegal right-turn-on-red and hit me. Thankfully I’m fine. The driver was mortified and very shaken. He is a cyclist himself.

Here’s a picture of the intersection. I think you’ll agree that this is an accident waiting to happen.

I’d like to here your suggestions and a plan for fixing this situation. I have a wife and a six month old child. Thank god I’ll be going home tonight without injury. I’m not sure the next cyclist will be as lucky.

The current bike routes along Alaskan Way are clearly not working. And with construction set to continue for many years longer, something must be done to make it safer for people on bikes.

Do you bike through the construction area regularly? What other issues need to be addressed? 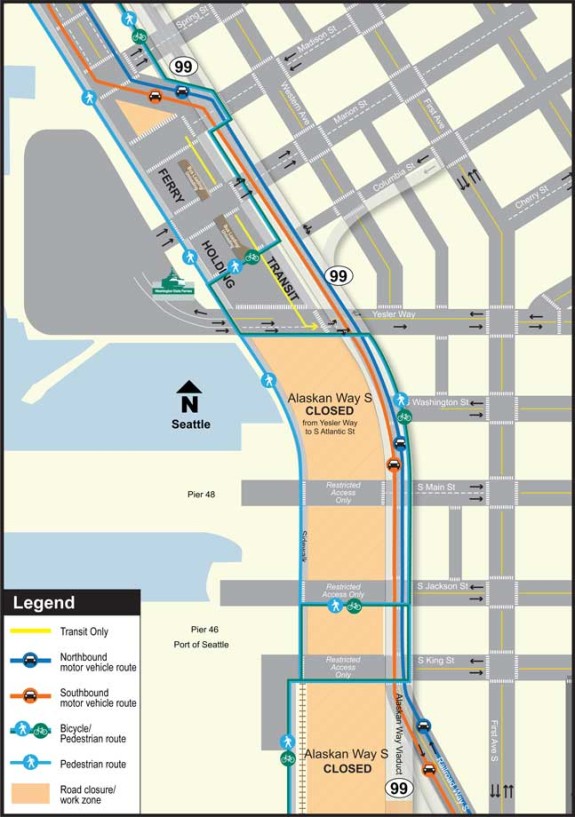 UPDATE 2: The city does have guidelines for designing bicycle detours during construction, found here.

41 Responses to Reader hit by car under viaduct not injured, but concerned about safety on temporary bikeway