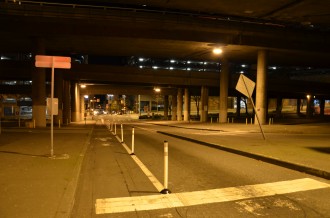 Image from the Reasonably Police Seattleites

The Reasonably Polite Seattleites just wanted to push the city to make some bike lanes safer. I doubt they imagined their small, “polite” statement about road safety would be used by New York City residents to pressure their leaders to complete a Midtown Manhattan bike lane.

But now Atlantic Cities reports that the Cherry Street protected bike lane and Seattle’s forward-thinking and equally polite response to the action is inspiring change in the heart of America’s biggest city.

After all, if the need for safety improvements is so strong that people feel they need to take action into their own hands, maybe that’s more a sign of city failures than activist delinquency.

To recap, an anonymous Seattle group spent $350 of their own money in April to install reflective plastic bollards on the Cherry St bike lane under I-5 as a way to demonstrate how easy and affordable it is to give bike lanes more protection from cars. They then sent an email to Seattle Bike Blog and cc’ed the Seattle Department of Transportation explaining their intended statement and pointing out that they used a simple adhesive to make the bollard easy to remove if the city chose to do so.

But instead of being angry, SDOT Traffic Engineer Dongho Chang responded with an equally polite email thanking the group for their statement about traffic safety and apologizing (yes, apologizing) for needing to remove them.

But the story doesn’t end there. SDOT took their advice and designed permanent and expanded bike lane improvements, which they installed just a few months after the guerrilla improvements were removed.

This is the kind of reception the NYC group, calling themselves “Right of Way,” is hoping from their city. From Atlantic Cities:

The other night, a group of cycling advocates calling itself Right of Way took matters into their own hands, spray-painting heavy white lanes and icons of people on bikes similar to the official DOT version (although some had wings). Their action came after a cabbie jumped the corner at 48th and Sixth, hitting a young British tourist and severing her leg. The driver later claimed he accelerated and lost control because of an argument he was having with a bike messenger.

Liz Patek, a Right of Way member, told the New York Times the crash might not have happened if there had been a bike lane in place. Another member of the group, Keegan Stephan, told Gothamist that their focus was on safety. “It’s been proven time and time again that if you install a bike lane, it lowers the number of crashes,” he said.

On its Facebook page, Right of Way calls attention to another guerrilla bike lane action that happened in Seattle earlier this year, as reported on Seattle Bike Blog. The “Reasonably Polite Seattleites” group installed $350 worth of reflective pylons along a painted bike lane on that city’s Cherry Street, to demonstrate to the Seattle Department of Transportation “how an incredibly modest investment and a few minutes of SDOT’s time is capable of transforming a marginal, under-utilized and dangerous bike facility into one dramatically safer for cars, pedestrians and bicyclists.”