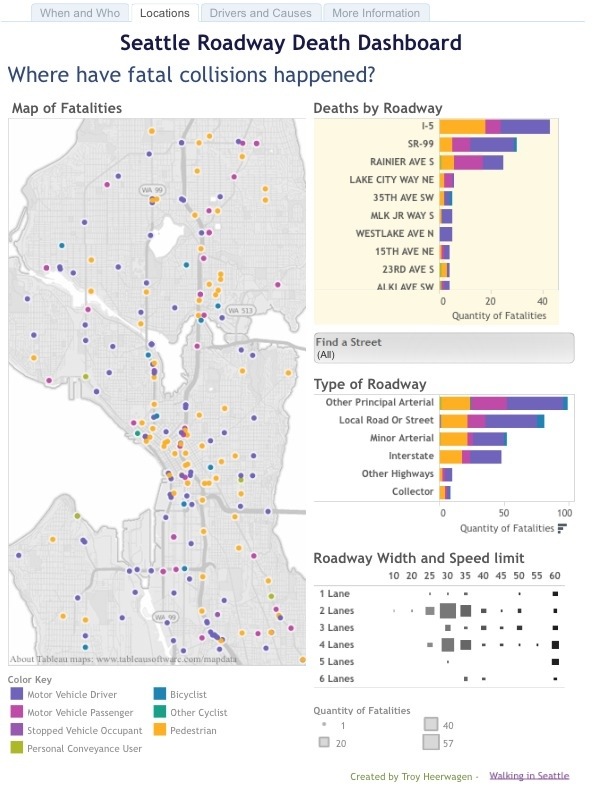 Troy Heerwagen at Walking in Seattle has created a devastating interactive graphic that tracks where and (to some extent) why people die in Seattle traffic.

Look at this data and remember that every single data point was a unique person with a network of friends and family whose lives will never be the same.

The data also shows that the brunt of road violence is not shared equally. Black residents bear a disproportionate share of road deaths in our city, and the rate of death on Rainier Ave is so much higher than the next most dangerous (non-highway) street in Seattle, it’s almost criminal that we don’t take action to fix it today.

Most of these deaths were preventable. We can make our streets safer, we just need to put the goal of preventing traffic violence ahead of all other transportation priorities.

This is not about people biking vs people driving vs people walking. People are dying is shocking numbers and in all modes of transportation, with people in cars bearing the highest number of deaths by far. Road safety projects are about protecting all lives, in and out of cars.

The sooner Seattle realizes that we’re all in this together, the sooner we can take drastic action to prevent another neighbor, friend or child from meeting an untimely and senseless death on the street around the corner from your home.

21 Responses to Devastating Data: Road death dashboard tracks where and why people die on Seattle streets