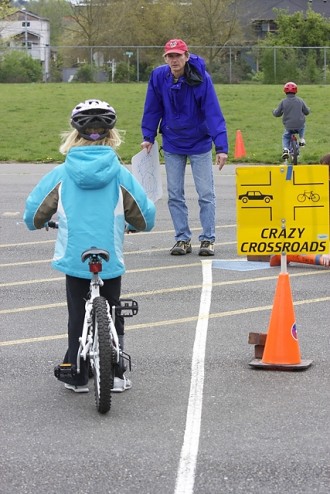 Tom and I have both written in the past about Seattle’s growing walk and bike to school movement. Increasing numbers of families are choosing to get to school under their own power, as volunteers around the city are creating programs and incentives to encourage them to give active commuting a try. While we keep hoping a tipping point is imminent, in reality most Seattle families still drive to school and there is still work to do to shift the transportation culture of our schools.

We are making progress though, and now is the time to get involved for the 2013-14 school year. Tuesday evening in Ballard, walk and bike to school organizers from throughout Seattle are getting together to share information on effective ways to maintain and increase this momentum. Come check out what the buzz is all about and learn how you can get involved at your local school. The info sharing session begins at 6:00 p.m. Tuesday, September 10, at the Ballard branch of the Seattle Public Library. Held under the auspices of walk.bike.schools, a loose affiliation of school organizers around Seattle, it’s open to anyone who wants to get involved.

It’s no secret that back to school season is upon us. You’ve probably noticed the increase in rush hour traffic; it may even affect your daily bike commute. The effects on traffic shouldn’t be a surprise, as the numbers tell the story. There are 50,000 kids at Seattle public schools, and many more at private schools as well. When they are all back in the classroom, school zones become chaotic and in some cases hazardous. Based on those numbers alone, there’s little doubt that a shift in school commute habits can not only increase kids’ health and safety, but can also be a big lever for changes in transportation patterns throughout the city.

But widespread changes in commuting habits don’t always come easily. Look at the huge effort that goes into encouraging folks to bike commute to work every May. Efforts to encourage more families to walk or bike to school have traditionally lagged behind, but that has begun to change.

This past year, the Seattle Schools superintendent and school board increased their encouragement for walking and biking to school, with Superintendent Banda and School Board Member Kay Smith-Blum attending a rally last year to support efforts to get more kids biking. The City of Seattle is increasing its focus on school-zone infrastructure improvements, as evidenced by this week’s School Road Safety announcement. And the City’s School Road Safety Task Force includes Seattle Schools and many other organizations as partners and advisors. But the real action in getting kids walking and biking has come from the grassroots efforts of parent groups.

Walk and bike to school programs have been sprouting up at schools all over the city, and networks have formed to share information and to learn from each other. This past May’s Bike to School Month was the largest ever and there are signs this trend should continue. Most recently, a group of schools have joined together to form Ballard Bikes. They’ll be hosting a kids bike rodeo at this weekend’s Ballard Neighborhood Greenway opening, as well as several other events over the course of the Fall. One of their goals is to shift bike commuting from a Bike to School Month event to a year-round activity. This has become a goal at other schools too.

There is a huge need for this type of parent and staff activism in every Seattle school and neighborhood. It’s the only way to create culture change in our schools, and ultimately in our communities.

For folks that want to get involved, next Tuesday is a great opportunity, especially if you are a parent or otherwise involved in your local school and want to begin or grow a walk or bike to school program. The info session is from 6:00 to 7:45 p.m. at the Ballard branch of the Seattle Public Library. More details on the walk.bike.schools site. Come help launch another year of walking and biking to school!