OMG! Somebody pedaled a Capital Bikeshare all the way to Seattle?!?! (not really) 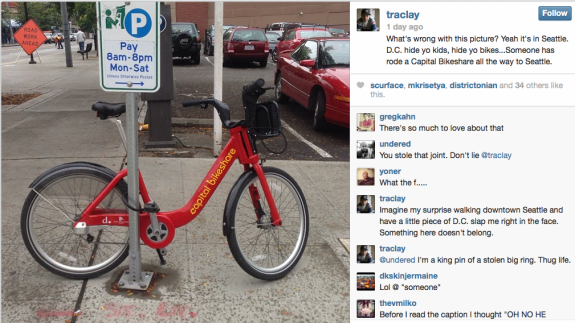 I received so many messages yesterday from people who saw this Washington DC Capital Bikeshare bike locked up in Seattle. It even led to a completely baffled post on DCist. Did someone really ride a bike share bike 3,000 miles to Seattle? Just imagine the overage charges they’ve racked up!

Unfortunately, no, this bike was not brought here by a confused and incredibly fit DC resident with a huge credit card bill. It belongs to Alta Bike Share and is on loan to Puget Sound Bike Share so they can show it off and demonstrate the style of bikes Seattle and King County can expect to see on our streets when the system launches in spring 2014. Alta is contracted for both the DC and Seattle systems.

Whether it’s an accident or on purpose, it’s brilliant marketing for Puget Sound Bike Share. They should probably just keep locking that bike up in prominent places around town, maybe attach a note explaining that PSBS is coming.

Also, can someone please do some calculations to figure out how many charges you would likely rack up if you did bike from DC to Seattle on a bike share bike? (Let’s assume they have the $75 annual membership so that they are not stealing. The first 30 minutes is free, second 30 minutes is $1.50, and every 30 minutes after that is $3…)

Speaking of bike share, the Bay Area launched their Alta-based system this week. With 500 bikes, this is of particular interest to Seattle because the Bay Area bikes are the first to have specs similar to the bikes in the Puget Sound Bike Share fleet. The biggest difference is the 7-speed shifting to help people climb hills (the other Alta systems use 3-speed bikes).

The challenge for bike share in a hilly city is: How do you make a bike that makes it easy to climb a hill, but encourages slower movement down hills? The high (fast) gear needs to top out at a lower speed (12 mph?), but the low gear needs to be able to climb Capitol Hill, for example. Obviously, gravity plays a big role in downhill speeds, but not being able to shift into higher gears on a downhill would probably be a good idea.

Also, San Fransisco has tons of trolley tracks. It will be interesting to see if the tires are wide enough to avoid injuries or if even fatter tires might be a good idea.

We should follow the Bay Area experience closely and see if anything needs to be adjusted ahead of the launch of PSBS to ensure a safe and comfortable experience.

11 Responses to OMG! Somebody pedaled a Capital Bikeshare all the way to Seattle?!?! (not really)