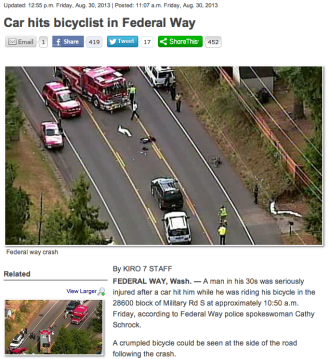 He was biking in the 28600 block of Military Rd S when he was struck by a person witnesses described as driving recklessly.

The collision occurred shortly before 11 a.m. Police conducted a drug and alcohol evaluation of the 31-year-old man who was behind the wheel at the time. They then placed him under arrest.

We have no updated information about the victim’s condition, but we send him our best wishes for a quick and full recovery.

The collision comes as Federal Way residents are launching a new neighborhood greenways group aimed at making streets safer for people of all ages to get around by walking and biking. Here’s a video released last week about the effort:

Founder and Editor of Seattle Bike Blog.
View all posts by Tom Fucoloro →
This entry was posted in news and tagged federal way, injuries, kiro. Bookmark the permalink.