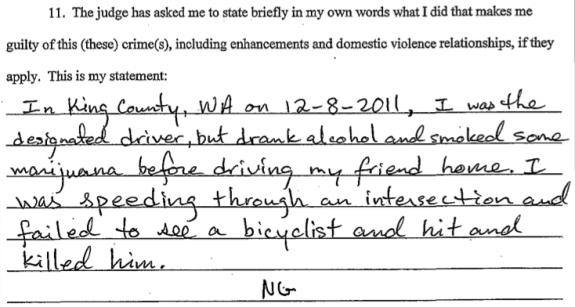 From a court document

Nathan Godwin faces 15-20 months in prison after pleading guilty to vehicular homicide and reckless endangerment after he struck and killed Bradley Nakatani in 2011. Nakatani was 36.

Godwin admitted to police that he had been drinking before getting behind the wheel and striking Nakatani as he biked through the intersection of NE 123rd Street and Slater Ave in Kirkland.

A driver accused of striking and killing a bicyclist in Kirkland in December 2011 pleaded guilty Wednesday to vehicular homicide and reckless endangerment.

Nathan J.Godwin, 26, of Redmond faces a possible 15-to-20-month prison term, followed by a year and a half of community custody, when he is sentenced Sept. 6 in King County Superior Court.

Court documents show that Godwin was supposed to be the designated driver for a friend, who was in the passenger seat when the collision occurred. Godwin continued driving a short distance, but his friend told him he had to go back if he hit someone.

Godwin failed a field sobriety test, then blew 0.078 on a breathalyzer. But in addition to alcohol, he had smoked a blunt and took several prescription pills.

This entry was posted in news and tagged bradley nakatani, deaths, nathan godwin. Bookmark the permalink.