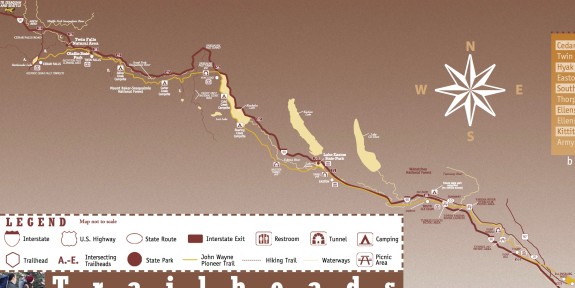 Biking Bis has some awesome news today: For the first time since 2009, all tunnels on the John Wayne Pioneer Trail between North Bend and Ellensburg are now officially open.

The trail recently got some great e-ink from the most excellent folks at the Path Less Pedaled. Russ and Laura have toured all over the place by bike, and have been documenting their travels for years. And they were spellbound by the John Wayne Trail (AKA the Iron Horse Trail) and convinced that it could be a huge bike tourism draw for the area and communities along the way.

Last month, Gene at Biking Bis reported on the reopening of several more John Wayne Trail tunnels, old railway tunnels that have been found to be leaky and maybe sorta falling apart. While not all of the tunnels have been fully repaired, they are all now open. The more shaky ones require users to fill out a liability form before using the tunnel, but hey, that just adds to the excitement … right?

The state closed all five tunnels on the 100-mile stretch of rail-trail between Cedar Falls and the Columbia River in 2009 after inspectors found seeping water and falling rock inside them.

Although the state created detours for each one, the routes often went for miles out of the way and in one case involved the unpleasant task of bicycling on Intestate 90.

The first of the tunnels was reopened in 2011 when contractors completed upgrades to the 2.2-mile long Snoqualmie Pass Tunnel. That sparked a resurgence in use on the trail, as many groups shuttled their bikes to Snoqualmie Pass for a 20-mile downhill ride from Hyak Trailhead to Cedar Falls Trailhead.

Gene reports that, though the tunnels are open, the Mountians-to-Sound Greenway Trust understandably still wants the tunnels with falling rocks to be repaired.