CDNews: To thank US for 2011 tsunami relief, Japanese man is biking up West Coast cleaning up trash 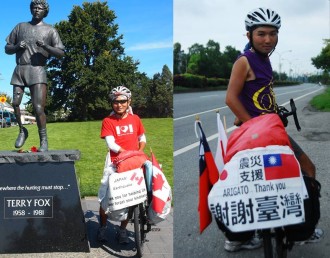 Ryo Ambe is in Seattle, nearing the end of his bicycle tour up the West Coast from San Diego to Vancouver, BC.

But Ambe’s tour isn’t just any bike tour. He wants to express his thanks to the US for its disaster relief support following the devastating 2011 tsunami that struck Japan.

To further show his thanks, he has been cleaning up trash along the coast during his ride. How cool is that?

If you’re free this afternoon, you can see him at the Japanese Cultural & Community Center at Rainier and Weller.

Jungle City and the Japanese Cultural & Community Center of Washington (JCCCW) are co-hosting an afternoon with Ryo Ambe, a Japanese man who is cycling 1,860 miles from San Diego to Vancouver, British Columbia. The event will be held this afternoon at 2:30pm at the JCCCW on 1414 S. Weller St.

Ambe is cycling to express his appreciation to the United States for its disaster relief efforts following the 2011 Japanese earthquake and tsunami. Ambe has been cleaning up trash at coastal beaches along his journey.

2 Responses to CDNews: To thank US for 2011 tsunami relief, Japanese man is biking up West Coast cleaning up trash