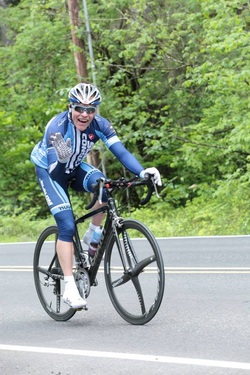 The man killed Saturday while cycling in Snohomish County near Woodinville was a well-known track cycling racer chasing three world records who friends say was a dedicated and gracious presence at the Marymoor Velodrome.

Jerry Shafer was 65 when he collided head-on with a car on 240th Street SE in Snohomish County, just north of Woodinville. The exact circumstances of the collision are not yet clear, though police say he was passing another group of people on bikes when he and an oncoming vehicle collided around 10:45 a.m. He died at the scene.

Shafer was not only a competitor on the track, he was also a philanthropist. The Seattle Times reports that he raised over $17,000 last year for retinoblastoma research:

Last year, he organized a fundraising event during which he set a national record (since broken) for the fastest 100 miles on a track for men ages 60-69, and netted $17,398 for a group that fights retinoblastoma, a rare form of eye cancer that afflicted his grandson when the boy was a toddler.

He died while on a training ride to try to win back his record and, again, raise money for research:

As part of his record attempt, he also planned to again raise funds for Retinoblastoma International, a nonprofit that fights the kind of eye cancer that afflicted his grandson. Lance Shafer lost one eye to the disease but has since been cancer free.

On his website, Shafer said he wanted to raise money and awareness so that other children “have the second chance at life that Lance has been given.”

With his death, fellow cyclists such as Solheim and Annette and Kenny Williams say they will hold the fundraiser anyway this coming Labor Day as a 24-hour relay. They are also planning a moment of silence in Shafer’s honor on Wednesday at the Velodrome.

A veteran of the Vietnam War, Shafer received two Purple Hearts. He had two grown sons (Hunter and Shafer) and worked as an accountant alongside his brother John, the Times reports.

He was training not only to regain his record for the fastest 100 miles on a track, but also for grueling records in the fastest 200 miles and for the most miles cycled in 12 hours.

If you want to join others in mourning his passing, the Washington State Bicycle Association is holding a celebration of Jerry’s life at the Marymoor Velodrome Wednesday. Details from the WSBA:

The NW cycling community lost a good friend this weekend. He was a teammate, competitor, family man, veteran, and someone that touched the heart and souls of some many. Please join us at the track on Wednesday 6/25 at 7pm for a celebration of Jerry Shafer’s life. Jerry was loved by all and his family is in town and would love to participate and experience the track that was a huge part of Jerry’s life. We are all grieving so please come and help support your teammates and friends. Racing is not required, but won’t be discouraged. Stay tuned for a rain location in case it is needed as forecast is iffy. But Jerr would not be discouraged by a little rain!
Official ceremony will be announced later. The WSBA sends its condolences to his family, many friends, and teammates.

Here’s a King 5 report from one year ago about Jerry’s record attempt:

Here’s the approximate location of the collision: