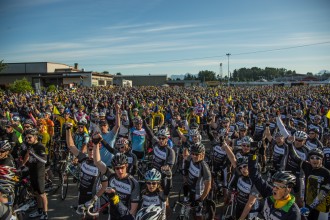 Photo from the start of the 2013 Ride to Conquer Cancer in Surrey.

Very sad news today from the Vancouver-to-Seattle Ride to Conquer Cancer. A teenager was killed after apparently falling and colliding with an oncoming car near Arlington.

He was riding with his uncle and mother on the two-day, 2,600-participant bike ride to raise money for the B.C. Cancer Foundation.

A 16-year-old cyclist from Victoria was killed in Washington State during the weekend’s fifth annual Enbridge Ride to Conquer Cancer.

Riders were into the second day of the annual fundraising ride from Vancouver to Seattle Sunday when the teen tried to pass a pack of cyclists on a two-lane rural road in Arlington, Wash, approximately 65 kilometres north of Seattle.

“It appears he pulled into the oncoming traffic lane to pass and fell,” said City of Arlington public information officer Kristin Banfield.

A 50-year-old woman, returning home from church, was driving “well below the speed limit” and could not avoid the fallen cyclist in time, according to Banfield.

The boy, who was participating in the ride with his mother and uncle, was treated on-scene by firefighters for 40 minutes before succumbing to his injuries.