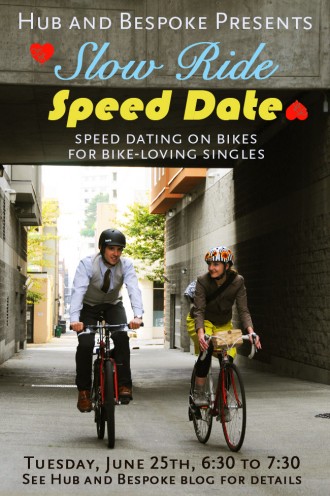 Because nothing’s quite as romantic as a bike ride, Hub and Bespoke (a SBB sponsor) is hosting another Slow Ride Speed Date.

Take a short cruise around Fremont with 13 prospective singles. Hey, you know you’ll have at least one thing in common: You both like biking!

13 guys and 13 gals* sign up to participate, first come first served. At 6 p.m. on June 25th, you meet us at the shop WITH your bike for quick instructions and a pep talk (“You’re all wonderful people! Remember to ask the other person questions! Don’t crash your bike!”). You must have a bike to participate.

We’ll then move to the speed date area somewhere in the neighborhood. There will be a preset route that won’t change so you can focus on the conversation rather than on way-finding. Each ride will be about 3 or 4 minutes long, and you’ll go on one “date” ride with each participant of the opposite sex.
We’ll provide you with a little booklet that you can use to keep track of who you want to follow up with after the event. At the end of the event, we’ll collect the booklets and later notify you of any matches (i.e. anyone you choose to follow up with who also chooses you).

After the event, feel free to join us for a drink at a neighborhood watering hole (TBD). Then you can bike home and think to yourself, “That wasn’t so bad… Heck, it was downright fun!”

One last thing, and it’s important: For this round, we’re asking for participants aged 21 to 35’ish. The last couple times we hosted a speed date event, we got feedback that a little segmentation by age would be helpful, so we’re obliging that request and trying it out. In August we’ll be doing a round specifically for those 35’ish and up, so stay tuned if that’s your category! We won’t be enforcing the age cutoff, but rather leaving it up to you self-select which group to go with.

Due to logistics of a speed dating event, the June 25 event is only for people looking for someone of the opposite sex. However, if you are interested in a gay and lesbian event, be sure to email Hub & Bespoke. If they get enough responses, they’ll organize a separate event.

Founder and Editor of Seattle Bike Blog.
View all posts by Tom Fucoloro →
This entry was posted in news and tagged bikesexuality, hub and bespoke, slow ride speed date. Bookmark the permalink.