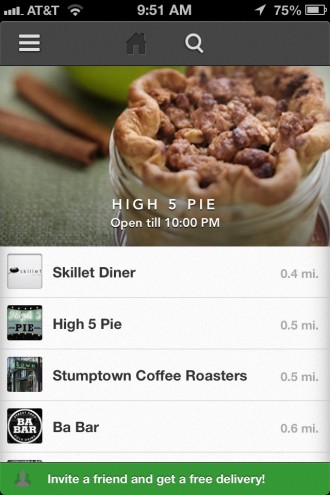 When I woke Tuesday morning, my partner Kelli had a piece of birthday cake waiting for me. But three days later, when her birthday rolled around, all I had for her was a cup of coffee and shoddily-assembled egg sandwich. My veggie side-dish was lackluster, and the cherries weren’t ripe (ok, I guess it could have been worse).

Enter: The best-timed press contact email ever, from Ayako Igari at Postmates. I met Ayako when she was working promotions for a recent Via6 bike breakfast. Now she’s working at Postmates, and wanted me to give it a try and maybe let folks know that they are hiring bike couriers.

So I downloaded the app and pulled up the list of nearby businesses available for orders (it’s a lot). The first one to catch my eye was High 5 Pie. Perfect! I ordered a Lemon Blueberry. 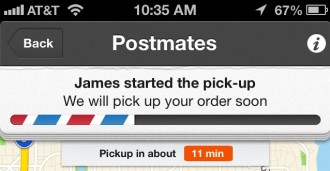 The app brings up a map and this icon spins as it tries to pair you with a courier. Similar to how the car-sharing service Uber works, the app searched to match me with a courier near High 5 Pie. Turns out, James was gonna bring it (thanks, James!). It also tracked his progress getting it to me in case I’m too impatient to wait up to an hour for the pie I just ordered on my freaking phone.

Within a couple minutes, someone in San Francisco called to tell me the bad news: They didn’t have Lemon Blueberry. But then she listed the flavors they did have. I picked the Marionberry. 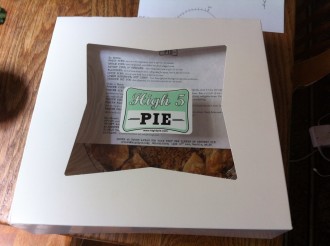 Within an hour, James was knocking at my door with a Marionberry pie from a local company. You pay entirely through the app using a credit card on file, so no cash changes hand (James told me they can’t even take cash tips). Just click confirm on James’ phone, sign and that’s it. Birthday saved!

Not every courier for Postmates rides a bike, unfortunately. But Ayako said specifically that they are looking for people to deliver by bike right now.

Many of you may remember the popular but unfortunately short-lived bike delivery service Kozmo in the 90s. Geek Wire spoke with Postmates CEO Bastian Lehmann back when the service launched in Seattle in March, and Lehmann seems to have heeded the lessons of Kozmo (which, by the way, played an unintentional role in the birth of modern bike polo right here in Seattle).

The biggest difference is that Postmate does not have its own warehouse of things in stock. Instead, the service looks to document what is available in nearby stores, both big and small (what Lehmann calls “the inventory of a city”). And, as I learned, if the business is out of that particular item when you order, they have a customer service mechanism ready to work it out over the phone.

Delivery isn’t free (though, full disclosure, I did use the free delivery promo Ayako sent me, which saved $6.50). Cost of delivery varies based several factors, including the estimated time the courier will need to make the delivery.

The app is sharp and easy-to-use. I also love that I can order from small businesses in a town where Amazon’s same-day delivery seems to really be catching on.

Ideas for Postmates: Partner with Bicycle Benefits to offer their discounts when your couriers pick up on bike. Also, would it break the system if I could choose my courier’s transportation mode? I’d pay extra for someone on a bike if I needed to…

UPDATE: Here are some details about being a courier, from Postmates:

Some Details:
Join Postmates and make $12+/hour delivering food and merchandise to local customers in Seattle!

All Postmates couriers are independent contractors and are paid per job, plus tips. Average compensation is $12-14/hour. Hours of operation in Seattle are 8:00am-midnight, 7 days a week.

The best part is that you can set your own schedule and decide how many hours you’d like to work each week!

This entry was posted in news and tagged postmates. Bookmark the permalink.