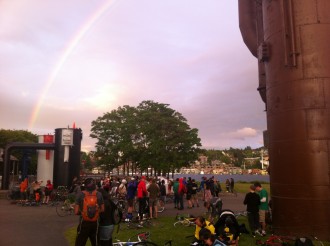 A rainbow blessed the start of the 2012 Nine to Five

This year’s Fremont Solstice Parade starts several hours later than in previous years (3 p.m.). Does that mean this year’s Solstice bike ride will be the biggest ever? If the weather behaves, I think so. A location for the official pre-ride painting party has yet to be announced. Stay tuned for more details on the ride.

Registration opened a few weeks ago for the Nine to Five, a borderline insane all-night scavenger hunt that is one part alleycat, one part randonneur long-distance ride, one part cargo-hauling exercise and all fun.

Teams of riders get lists of items and photos to gather starting at sundown and ending at sunrise on the shortest night of the year. There are checkpoints along the way to get new item lists from organizers, and each item has a point value attached to it. It is possible that you will find yourself wearing a tutu while your teammate takes a photo of you singing Dolly Parton’s hit “Nine to Five” with a stranger you met out and about at 3 a.m.

It costs $25 to register in advance for the June 22 event. 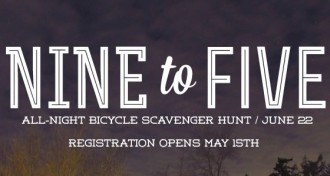 Ride all night in Seattle’s only all-bicycle sunset-to-sunrise scavenger hunt! Organize your team of up to five or ride solo to complete as many items as you can before sun up while joining group meetups throughout the night for caffeine and snacks, and a full breakfast in the morning. A celebration of our city and bicycles!

The scavenger hunt starts with check-in at Gasworks park beginning at 8:00pm on Saturday, June 22nd, where you and your team will pick up your list of items and begin planning your evening. You must stay at the start until 9:10pm (sunset) when the race officially begins! You will ride all over the city finding items, hitting photos ops and hanging out with your fellow racers for coffee and treats at official meetups ups before the race ends with a catered group breakfast at 5:11am Sunday morning (sunrise).

Pre-register now to ensure we have plenty of food and supplies to get us through the night and receive a Nine to Five 2013 t-shirt, only available if you pre-register! Cost of pre-registration is $25, and you will be asked to specify whether you’d prefer a vegan or omnivore-friendly meal.

Founder and Editor of Seattle Bike Blog.
View all posts by Tom Fucoloro →
This entry was posted in news and tagged fremont solstice parade 2013, go means go, nine to five. Bookmark the permalink.