Ride enough miles and its inevitable: That hissing sound, followed by the sensation that you just started biking through wet cement. But it’s not the pavement. Your tire just went flat. Damn.

But while fixing your flat, something almost magical happens: Nearly every stranger biking by suddenly turns into a friendly roadside assistance service.

“You got everything you need?” “Everything ok?” “Need any help?” 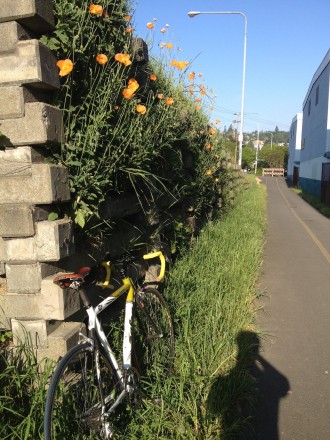 A reader sent me a note this morning about how people passing him near Fisherman’s Terminal not only offered him help, but also did their part to help clear the glass that caused his flat from the trail:

Ran over a big ol’ pile of glass this morning near Fisherman’s Terminal.  As I was changing the flat in the sun next to the poppies growing out of the retaining wall, I warned other riders as they approached and nearly all of them stopped, asked if I needed any tools, and picked up a few handfuls of glass and threw them to the side of the trail.  Seattle commuters are the coolest peeps.

This is not about extraordinary acts of kindness, it’s about some kind of inherently understood sense of duty that everyday people assume when they hop on a bike. It’s just like how residents who know their neighbors and feel a sense of ownership over their neighborhood are more likely to pick up litter or clear a clogged storm drain in front of a stranger’s house down the street.

It’s not that people on bikes are inherently better people than people in cars. Being on a bike simply makes a person part of their surroundings, whereas a car is a closed environment moving through a space (just ask Louis C.K. how that works out).

It’s why, when I get really down about humanity after reading a horrifying abduction story out of Cleveland or hearing a depressing story about a former military drone pilot’s emotional trauma, I hop on my bike and suddenly am filled with hope that everyday people are genuinely loving and helpful when given the chance.

This entry was posted in news and tagged kindness, louis ck, ted quanstrom. Bookmark the permalink.