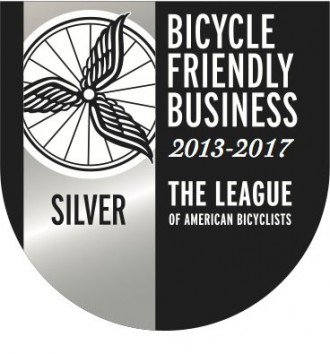 Just in from Intercity Transit:

Just as the nation celebrates another Earth Day, there’s timely news occurring in Olympia, Washington, as well as elsewhere around the country. Intercity Transit, the region’s public transportation provider, was recognized as one of the first transit systems in the U.S. to be designated a Bicycle Friendly Business by the League of American Bicyclists.

Along with Intercity Transit, 62 other organizations – from across the private and public sectors – earned the Bicycle Friendly Business (BFB) designation this year.

The recognition for Intercity Transit, known for its sustainability efforts, is due to its long history supporting bicycling as an earth friendly and appealing commute option as well as its substantial bike programs. One of those programs is the popular Bicycle Commuter Contest, which engages about 1,500 cyclists each May  bicycling to work, school, and on errands, reducing harmful CO2 emissions by 60 tons and an estimated 120,000 miles of car trips each time.

The agency also runs an innovative Bike PARTners program in which a largely volunteer staff rebuilds discarded bicycles and works with elementary school students teaching bike mechanics and safety, resulting in the students “earning” bikes for their future transportation use. And last year Intercity Transit began a staff bicycle program for employee use when traveling to nearby meetings and mid-day errands, effectively expanding employee wellness initiatives.

This entry was posted in news and tagged intercity transit, league of american bicyclists, olympia. Bookmark the permalink.