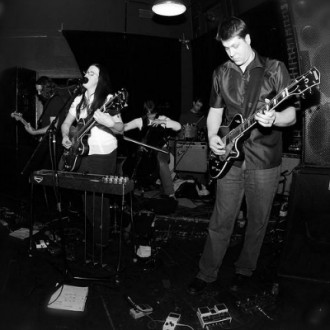 On a chilly but particularly beautiful bike ride to work one day, Seattle band Half Light’s lead singer Dayna Loeffler was inspired to write a song.

Now, the band is putting together a music video for the song “Emerald City” (listen below), and they need your helmet cam footage. So if you shoot video while biking and want to help out a local band, get in touch with them and send your best Seattle-by-bike footage.

They hope to get it all pieced together by Bike-to-Work Day in May.

More details from Half Light:

Seattle-based dream-pop band Half Light needs help from the city’s cyclists. We’re looking for cycling footage to use in a video for our song “Emerald City.” The song’s lyrics were written after our bass player / lead singer, Dayna Loeffler, had a particularly nice ride into work. Dayna says she remembers that there was no traffic on the Ballard Bridge sidewalk, that she had no trouble merging into traffic and though it was cold, the sun was shining and the view of the Puget Sound and the Olympic Mountains from Myrtle-Edwards Park was epic.

We want to stitch together video that shows the glory of our city as seen from the saddle by using footage taken by cyclists during their rides all over the Seattle. In particular we want footage taken in sunshine (or Half Light) that is not too shaky, bumpy or rough (easy to look at and follow) and shows the beautiful places in our city. Places like: Seward Park, any bridge, the arboretum, Lake Wa BLVD, any mountains, downtown, waterfront, iconic skyline views etc. If your clip is used in the video the band will get you a free MP3 download of the entire new album and full credit will be given to all video contributors. Contact [email protected] for complete details.

This commuter vid has nice lighting and is not too shaky – we’d like a little more scenery, but this is pretty close: http://www.youtube.com/watch?v=5CvyRCDnF-g

Founder and Editor of Seattle Bike Blog.
View all posts by Tom Fucoloro →
This entry was posted in news and tagged half light. Bookmark the permalink.