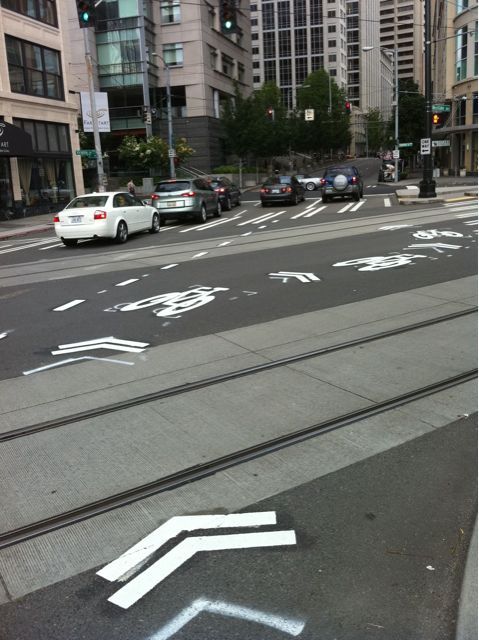 In addition to the new buffered bike lanes on one strip of 7th downtown — which, while short, are totally awesome — there is now some new paint to help guide bikers across the dangerous streetcar tracks from the SLUT at Westlake.

These tracks are the subject of a lawsuit brought by a group of cyclists who were injured while attempting to cross the tracks and who allege the city was negligent in the trolley’s design and implementation.

Following the design of the Missing Link track-crossing sharrows, the new markings guide a cyclist to the right of the lane, then across one set of track at a proper 90 degree angle, then makes a sharp right turn, then back left across the second set of tracks.

It’s fairly odd-looking, but so far I think I like it. It does two key things fairly successfully. First, it at least gives bikers an idea of what to do to avoid getting horribly hurt. This won’t necessarily help experienced riders who have encountered he intersection before, but it will help those encountering his very odd intersection for the first time.

Second, it attempts to alert drivers that bikes will be making maneuvers here, and that they should give more space. I plan on observing driver behavior sometime in the coming weeks to see if this is, indeed, the case.

One potential problem is that bikers might interfere with each other if one tries to make the maneuver and the other does not. Again, I want to observe the intersection to see how things seem to go.

A few weeks ago, I got into a debate over on Seattle Transit Blog defending the basis of the bike-trolley lawsuit. You can read that comment thread for an interesting argument that sadly pit bikes and transit against each other. 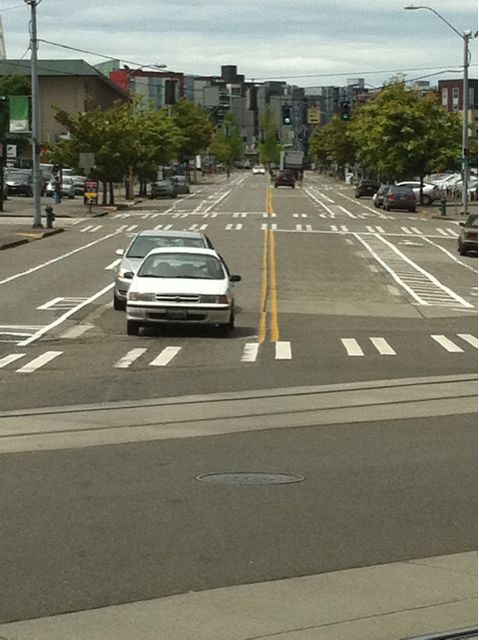 The new buffered bike lanes on 7th, looking from Westlake.

Founder and Editor of Seattle Bike Blog.
View all posts by Tom Fucoloro →
This entry was posted in news and tagged slut, streercars. Bookmark the permalink.