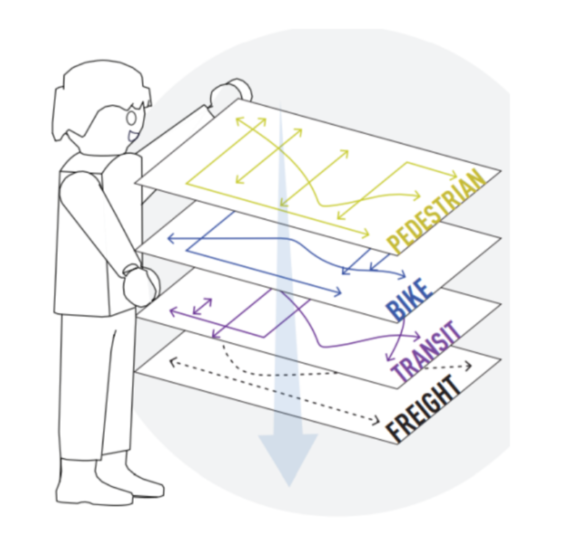 The Seattle Transportation plan is seeking to integrate all the existing modal plans. Space for people on bikes continues to be treated very differently than other modes. (Image: SDOT)

In late 2020 and early 2021, the Seattle Bike Blog covered work happening behind the scenes at the Seattle Department of Transportation to work toward integrating the city’s different modal plans (bicycle, pedestrian, freight, transit) into one plan. This technical work will underpin the Seattle Transportation Plan, which the department formally started public outreach on last week. All of this work will ultimately be incorporated into Seattle’s major update to its Comprehensive Plan, to be finalized in 2024.

Details of that technical work revealed how SDOT was developing a map of “critical” bike corridor segments across the city; segments that the department didn’t deem critical wouldn’t be prioritized for added bicycle infrastructure in cases where the street width was found to be too narrow. An analysis of every block in the city compared against the various modal plans found that it was just the facilities outlined in the 2014 Bicycle Master Plan- 339 out of 340 blocks citywide- that were found to be creating conflict between the existing modal plans.

Only prioritizing protected bike lanes where they’re deemed critical  is an easy way to resolve the conflicts, but the point of a citywide network is that it’s citywide. It also sidesteps the fact that installing bike facilities where they’re called for in the BMP is about making people using those routes safer. SDOT is already contemplating a freight lane policy that could mean some bike riders who feel comfortable using transit-only lanes would need to find somewhere else to be. But not prioritizing people on bikes on a specific street doesn’t mean they go away, it likely just means it’s more dangerous for them to be there. This work looked to mean the end of the bicycle master plan as we know it. 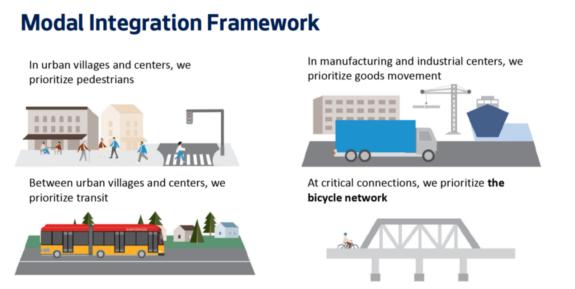 Every area of the city gets a designated place for each mode to get priority- except for people on bikes. (SDOT)

A draft map of these critical bike segments was due to be released by this month, but has been delayed by SDOT. Now new internal documents requested by Seattle Neighborhood Greenways and reviewed by us illustrate how concerns from other departments within SDOT have been raised around how safety is incorporated into the modal prioritization framework.

In a document dated mid-November summarizing how this work could impact SDOT’s Product Development Department, those concerns are noted. “Staff are concerned that with the implementation of [the Policy and Planning Department’s] Critical Bike Network…that this will change how the [Bicycle Master Plan] is implemented,” the document reads. “Additionally, staff are concerned this policy with [sic] deprioritize safety for vulnerable roadway users.” Seeing concerns raised in writing like this is pretty notable, and those concerns align with alarms being raised by those outside the department.

Copies of presentations that were set to be given to the Bicycle Advisory Board⁠—but which have been postponed⁠—show how the primary criteria for identifying critical connections include network integrity (spacing separated bike routes no more than 1/2 mile throughout the city) and network legibility (fewest number of turns on flattest route). These criteria have a lot to do with safety, but they aren’t themselves concerned with keeping everyone on bike routes designated in the current Bicycle Master Plan safe.

Draft criteria from a presentation to be given to the Bicycle Advisory Board that has now been delayed. (SDOT)

“The Seattle Transportation Plan updates and combines the city’s bike, pedestrian, transit, and freight master plans into one plan. It determines how and where each of these modes can fit into Seattle’s streets,” an action alert released by Seattle Neighborhood Greenways this past Saturday noted. “So far, planning for bike routes doesn’t include safety, equity, and connectivity filters. That’s a big problem.” SNG is asking people concerned about this issue to contact the city council. Cascade Bicycle Club is doing the same, pushing for the new plan to build on the work that shaped the BMP and not to start over.

Concerns raised around the policy were enough to prompt the city council to adopt a proviso in last year’s budget requiring that work be run by the council. Tomorrow morning’s Transportation & Seattle Public Utilities Committee meeting will be one of those chances as SDOT presents on the Seattle Transportation Plan. The councilmember who proposed the proviso, M. Lorena González, is no longer in office, but this plan will need close attention from at least one councilmember if it’s to be improved.

The Seattle Transportation Plan starts from a solid foundation of seeking to integrate the modal plans, and SDOT’s plans for public outreach all look better than anything the department has ever done, but if the technical work that makes up the core of the plan is flawed and doesn’t center the safety considerations that lie at the heart of the current Bicycle Master Plan, we will be assured bad outcomes when it comes to making space for people on bikes. If we don’t get it right, it could set things back for a decade or more.