Person on bike struck and killed by driver in Georgetown collision

Just before 5pm Wednesday evening, someone riding a bike was struck and killed by the driver of a semi-truck in the Georgetown neighborhood, according to the Seattle Police Department. The collision took place at the intersection of Corson Ave S and S Michigan Street, which turns into S Bailey Street east of Corson. From SPD:

Prior to the collision, the driver of the semi-truck was stopped facing northbound at the intersection of South Michigan Street and Corson Avenue South, preparing to make an eastbound right turn [onto Bailey Street]. As the driver waited at the light, a bicyclist that had also been travelling [sic] northbound pulled in front of the truck, apparently out of view of the driver. When the truck pulled forward to turn right, the bicyclist was struck and killed.

The person riding the bike was approximately 40 years old, according to the department.

The curb ramp from Corson onto Bailey has a very large apron to accommodate the wide turning radius of large freight trucks that travel through the area. Georgetown has received a much larger volume of vehicle traffic since last March when the high West Seattle Bridge was entirely closed, though the low bridge remains open to freight traffic. The semi truck on SDOT’s traffic camera showed a visible USPS logo. There is a USPS distribution facility not far from Georgetown in Tukwila, and a USPS vehicle maintenance facility in SoDo. 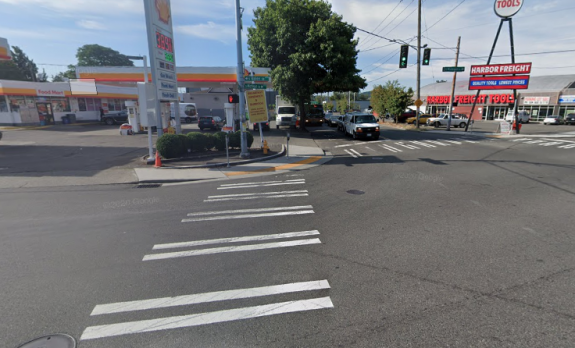 This is at least the sixth traffic fatality on Seattle’s streets so far in 2021 and the first we know of where someone involved was riding a bicycle.

We are heartbroken at this news, and are thinking about what this person’s family and friends must be going through right now.

Ryan Packer is Temporary Editor of Seattle Bike Blog.
View all posts by Ryan Packer →
This entry was posted in news and tagged traffic violence. Bookmark the permalink.