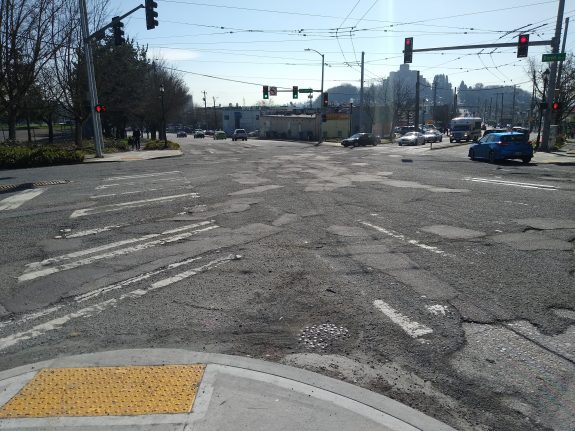 This stretch of 12th Ave S is one of the most dangerous spots in the city for people biking. From the letter:

SDOT collision data shows that 66 cyclists and pedestrians were injured on 12th Ave S between E Yesler Way and S King St between 2004-2019, a rate of about four and a half injuries per year. We frequently observe even strong cyclists riding on the sidewalk along this stretch of 12th Ave S due to the stressful riding conditions, particularly northbound.

In 2019, a presentation to the bicycle advisory board stated that SDOT had modeled adding a protected bike lane to each direction of 12th Ave south of Yesler Way, and that “impacts to Yesler, Boren, and Jackson intersections add significant delay and queue lengths” and that the impact would “especially delay streetcar and transit”.

The letter asks for intermediate improvements that are not full bike facilities.

Adding a safe bike connection to this segment would connect the protected bike lanes already in place on Yesler and Broadway; connecting existing facilities has been reiterated over and over again as a high priority for the expansion of the bike network by SDOT.

As SDOT moves forward with a proposed policy that would prioritize bike facilities in contested segments like the ones being discussed here only if they are deemed “critical” segments, this segment is clearly one of the most critical in this area of the city.